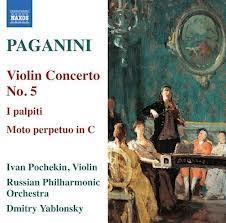 For some years now Naxos has ceased to be seen as a budget label of workaday renditions and has attained critical acclaim. In some respects, this disc continues this trend. Ivan Pochekin, winner of the 2005 Paganini Moscow International Violin Competition, is certainly more than up to Paganini’s extreme technical demands, with some wonderfully precise execution in the first movement of the Concerto, and some very assured double-stopping, artificial harmonics and, indeed, left-hand pizzicato in the ‘I palpiti’ variations. But there are also shortcomings. The recording places microphones very close to Pochekin’s violin and, notwithstanding the prowess of his playing (with a naturally very rich and well-nourished tone especially in lower registers) the result is inevitably gritty, especially in the Moto perpetuo that opens the disc. More generally, high-register work (of which there is, inevitably, rather a lot in such repertoire) sounds strident and harsh much of the time.

The playing of the Russian Philharmonic Orchestra under Dmitry Yablonsky is highly competent but also rather jaded, and the entire disc conventional to a fault. Being able to play Paganini accurately is an amazing thing, to be sure, but in an age of such extraordinarily high standards one should be able to hope for rather more.