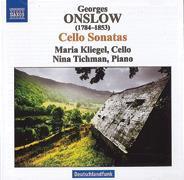 Five years after Beethoven wrote his last cello sonata, George Onslow, a descendent of the British nobility writing in Paris, penned his own three works in the form. Although lighter and more genial than the greater composer’s, they frequently call to mind passages from Beethoven’s five such compositions. Far from revolutionary, Onslow’s cello sonatas are however attractive and well-crafted works in the late Classical style, which make for rewarding listening.

German cellist and Rostropovich protégé Maria Kliegel, whose recording career on the Naxos label has been maintained for 22 years, plays the sonatas with taste and restraint, cherishing the many graceful turns of Onslow’s melodies. Unfortunately, the tone of her c.1730 Tononi cello is not well served by the less than crystal-clear recording, as it sometimes fails to speak clearly when hushed, and less is refined than the music requires.

High points from the three sonatas include the C minor minuet’s striking trio, where both cello and left-hand piano imitate a plucked guitar accompaniment, and the interplay between the two instruments in the beautiful D minor Andante of Sonata no.1, although Kliegel’s playing here is unusually just a little too forceful and her A string sound a trifle hard.