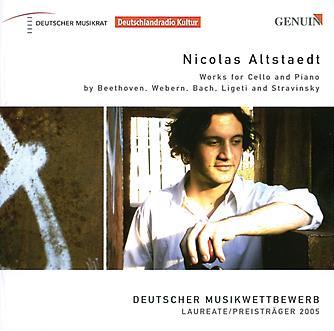 This uncommonly well-planned and recorded recital may have arisen from a competition winner (of the 2005 Deutschermusikwettbewerb) wishing to display the range of his abilities, but it offers a far more satisfying experience than most such showcases. Beethoven’s Fourth Cello Sonata teases as it charms, with an almost lazily drawn opening Andante that makes an ideal foil for the nervous energy of the succeeding Allegro. The Adagio moves forward while never forsaking the uneasy calm that is its due property, imperceptibly giving way to the competing claims of violence and elegance in the finale. In short, it’s late Beethoven, fully realised as such.

Then come the Webern works for cello and piano, achingly done, and how modern the Fifth Bach Suite sounds when placed between the sonatas by Webern and Ligeti! A swift approach to the dance movements is one reason, but another is the remarkable variety of bowing and articulation that never stands on ceremony: the prelude is startlingly flexible and ruminatory, the sarabande cool and distant, the gigue almost thrown away. So too the opening dialogue of the Ligeti is more intimately conversational than a similar debut album from the fine Emmanuelle Bertrand on Harmonia mundi, and the concluding Stravinsky Suite italienne reveals a more dashing awareness of its Baroque models than Tatiana Vassilieva’s first album for Naxos. Altstaedt is already much more than promising, and anyone interested in a freshly uninhibited approach to Bach should hear him.