The Austrian ensemble will receive the award worth €10,000 at a ceremony on 8 December 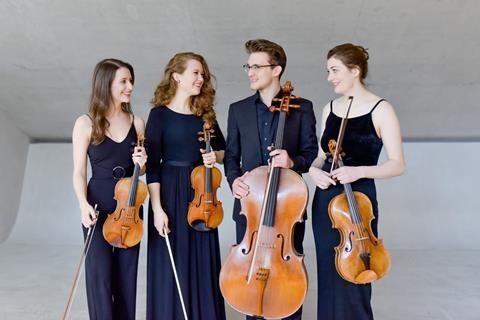 This is the third time the prize has been awarded since its inception in 2020. The quartet will receive €10,000 at a ceremony on 8 December in recognition of its ensemble playing. ’Thanks to their studies at the Mozarteum, they combine the tradition of the music city of Salzburg with everything that is required of a young string quartet today: perfect technique of the individual, understanding of the interaction and maximum range in dynamics and tone,’ said the jury.

The prize commemorates the composer, musicologist and teacher Hans Gál (1890-1987), who was director of the Mainz Conservatory from 1929 to 1933. He was put on leave after the Nazis seized power due to his Hungarian-Jewish descent and emigrated, first to Austria and then to Great Britain in 1938. In 1945 he became a British citizen and taught at Edinburgh University until 1955. The quartet will perform Gál’s second string quartet at the award ceremony.

Previous winners of the prize are the string quartet Esmé from Cologne and the French trio Sōra.