The Strad February 2022 issue is out now! 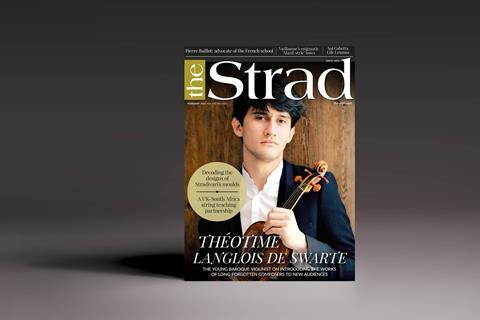 Théotime Langlois de Swarte: The Baroque violinist’s career has taken off in the past year. Charlotte Gardner talks to him about his quest to popularise the works of long-lost composers

Vuillaume’s ‘Alard’ Bows: Several examples from the maker’s Paris workshop have an unusual frog design. Michel Samson examines why this innovation has been disregarded until now

Pierre Baillot: Martin Wulfhorst explores the career of the violinist and composer (1771–1842), explaining his importance and centrality to the French school of playing

Cremonese Violin Moulds: André Theunis and Alexandre Wajnberg present a theory showing how 16th-century luthiers may have based their violin proportions on musical principles

Violist Konstantin Boyarsky discusses playing Bruch’s Romance in this month’s Masterclass, while double bassist David Allen Moore gives tips on how to build on bow curves in Technique. Philippe Graffin shares his love for the Elgar Violin Concerto in this month’s Sentimental Work, while Argentinian cellist Sol Gabetta shares her memories and opinions in Life Lessons. This month’s Opinion features Rita Fernandes on why classical musicians should take inspiration from the world of stand-up comedy.

We take an In Focus look at a 16th-century vihuela de arco and My Space features Paris-based luthier Florent Boyer. Robin Jousson presents his design for a device to measure string tension in Trade Secrets, while Wenjie Cai and Hwang-Ching Tai examine whether or not an 18th-century violinist would have been able to afford a Stradivari in Making Matters.

We also bring you news of the latest products and auctions, plus our regular analysis and opinion columns, and comprehensive reviews of concerts, recordings and books. Simply go to the current issue to explore the full content listing.

Plus, in your February 2022 digital edition: