The Strad August 2020 issue is out now 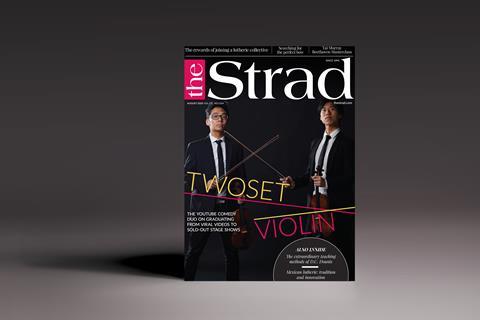 LUTHERIE COLLECTIVES: Groups of violin makers are appearing all over Europe and the US, to share their knowledge and promote each other’s work. Peter Somerford finds out more

FINDING THE RIGHT BOW: The aptly named Benjamin Bowman describes how he found his ‘forever bow’, taking in examples by Tourte, Henry, Knopf, Sartory and the Peccatte family

D.C. DOUNIS: The Greek-born pedagogue was highly sought-after in 20th-century America – so why are his techniques so little-used today? James Dickenson takes a closer look

VIOLIN MAKING IN MEXICO: Lutherie has a longer history in the New World than is usually appreciated. Pablo Alfaro and Jaime G. González track its development from the 16th century

We inspect a violin from 1710 by Alessandro Gagliano in In Focus; in Trade Secrets Grzegorz Bobak discusses labour-saving devices designed to make life easier at the workbench; My Space looks behind the scenes in the workshop of Minnesota’s John Waddle; and in Making Matters John Beames presents a detailed examination of a single bridge.