Milan Škampa, for many years violist of the Smetana Quartet and the last survivor of the six men who played in the group, died at his Prague home on 14 April. He would have turned 90 in June. 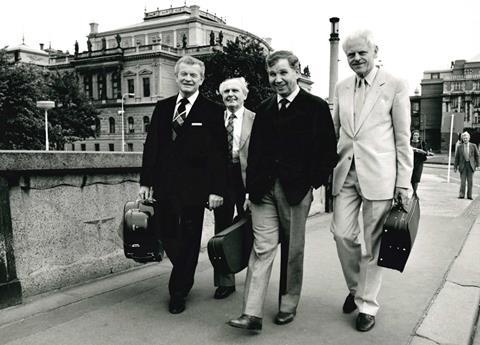 Milan Škampa, far right, with the Smetana Quartet in 1985

Born in Prague on 4 June 1928, Milan Škampa studied with his mother Antonie Škampová and Ladislav Černý, who had been classmates under Dvořák’s friend Ferdinand Lachner and Ševčík’s assistant Jindřich Bastař. His teachers at the Academy were Alexandr Plocek and František Daniel, and in 1952 he completed a doctorate at Charles University.

A keen musicologist, Dr Škampa had already thought of taking up the viola, his teacher Černý’s main instrument, when the call came from the Smetana Quartet. In a matter of months, he mastered the larger fiddle and the new clef, committing 14 quartets to memory. He was inspired by using Dvořák’s viola, made in 1859 by Ferdinand August Homolka.

After agonising re-study and a solitary Mozart E flat, K428, for the radio on 8 February 1956, the Smetana Quartet re-emerged in mid-March having made the significant leap from a good ensemble to a great one.

The vivacious Lubomír Kostecký and the tall, intense Škampa combined to give the inner parts a rare vibrancy and the new violist’s influence was all-pervasive. From concentrating on such technical matters as beauty of tone, balancing of chords, dynamic shading, precision of ensemble and matching of vibrato, the four came to give increasing attention to purely interpretative considerations, striving to find the right style and sound for each work.

Simply as an instrumentalist, Škampa brought a new thrust to the viola solos – his playing in Smetana’s ‘From My Life’, Dvořák’s ‘American’ and Shostakovich’s Third has not been surpassed, and in the Adagio of Martinů’s Fourth Quartet his solos were memorable. Among quartet violists he shone out for tonal imagination and the concentrated energy of his musicianship.

Sadly Dr Škampa did not make many solo records: the Mozart Sinfonia concertante with Josef Suk III had the widest circulation, but he could also be heard in the Mozart Duos, the Martinů Madrigals (two recordings) and the Martinů Sonata. He taught at the Prague Academy and after the quartet disbanded in 1989 he became sought after worldwide as a quartet guru, especially for Janáček interpretation. 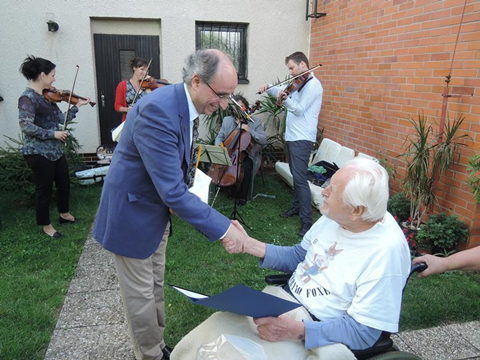 From his teacher Černý he had learnt to bring humour to his teaching, and he was much loved for his enthusiasm and occasional eccentricity. Over the years he used a plethora of bows and a variety of violas – at one time the Smetanas had a matching set of instruments by Přemysl Otakar Špidlen – but his final favourite was a bastard Italian viola which he passed on to Radim Sedmidubský.

Dr Škampa was confined to his home for the past four years, owing to mobility problems, but was still a willing source of advice for younger players.