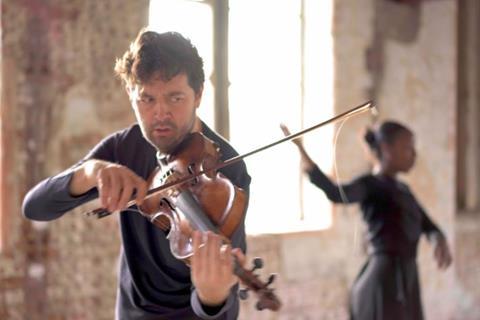 Following the Lockdown Commissions project, which saw Lawrence Power recording several new pieces for the viola in different empy iconic venues around the UK, the violist has set up a new video production company. Set up with film maker Jessie Rodger, Âme aims to produce films that explore the boundaries between music and other art forms, each relased on the company’s new website.

In the first video, released on 7 March, Power plays Bach’s Chaconne accompanied by dancer Sharia Johnson and soprano Héloïse Werner. It is filmed live across five floors of the Barge House on London’s Southbank and is an exploration of light, time, companionship and solitude.

Power explains the aim of the new company: ‘When you take the audience out of the equation, music can become more three-dimensional and the viewer can experience it in a different way. It’s exciting to investigate the possibilities of how we can do this. That is the aim of the new production company – to connect the Arts in new and dynamic ways, sharing live experiences on film, in interesting venues. We hope to communicate with new audiences who continue to find traditional concert halls a barrier.’

The production company will bring together artists from various disciplines. This is reflected in the name Âme, the French word for the soundpost, a small piece of wood that connects the front and back of all string instruments and transmits sound. Lawrence explains: ‘Violin design has remained unchanged over centuries, and the soundpost is the most integral part and yet the simplest. The French recognise it for what it is: “Âme” also means “soul”. The word describes the beating heart of a stringed instrument, which connects all its elements and creates and transmits its sound. That embodies the philosophy behind the new production company – connecting different art forms and amplifying the creative results.’