Journey through the Australian outback with cellist Richard Narroway

Funded by the Freedman Classical Fellowship, Narroway’s performances along the 3000km train route will be turned into a film 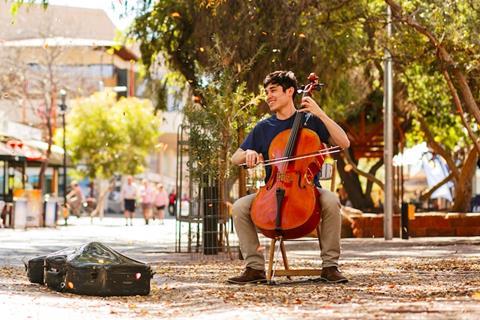 Having won the 2020 Freedman Classical Fellowship prize, which enables recipients to undertake creative and career-defining projects, the 29-year-old Melbourne cellist Richard Narroway has decided to spend his prize money ($21,000) realising his ambition of performing the cello solo aboard The Ghan, an Australian experiential tourism passenger train.

Narroway’s adventure aboard The Ghan train will commence in Darwin on Saturday 29 May and will continue on to Alice Springs, Coober Pedy and Adelaide. Narroway will perform cello solo for guests on board The Ghan and will entertain locals along the journey. The repertoire is Peter Sculthorpe, Ross Edwards, Kate Moore, Elena Kats Chernin, and two new electroacoustic commissions from Melbourne-based composers Tilman Robinson and Stephen Selios Adam. These works will  feature on an upcoming album Narroway will record later in the year.

Repeater Productions will film The Ghan journey, directed by Ben Golotta. The visual recordings will accompany the eventual recording release, with the aim of enticing a broad range of listeners to Narroway’s music.

The Freedman Fellowships are one of the most prestigious national music awards offered to Australian musicians.  The 2021 awards are scheduled for jazz on 30 August and Classical on 29 October at the Sydney Opera House.

Narroway will give a pre-tour concert, including some of the mentioned works, on 13 May at Hanson Dyer Hall, Melbourne Conservatorium.