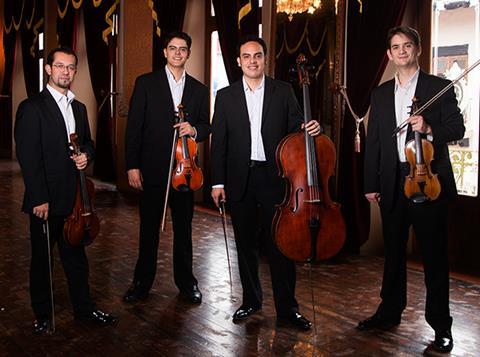 Cuarteto Chroma | The University of Victoria

The quartet, made up of violinists Ilya Ivanov and Carlos Quijano, violist Félix Alanís and cellist Manuel Cruz, competed against 15 other quartets for the prize.

The prize will see the quartet perform on an international platform under the new name of Cuarteto de Cuerdas de Bellas Arts (Fine Arts Quartet), working closely with the National Coordination of Music and Opera from January 2023. As well as earning a monthly stipend, the quartet will use this opportunity to represent their home of Veracruz, a state in Mexico.

Since its formation in 2015, Cuarteto Chroma has won a number of prizes including, the MM Ponce Prize in the Aguascalientes Chamber Music Festival 2016, the first prize in the Mateo National Chamber Music Contest, and second prize in the La Superior National String Quartet Contest 2017. In 2019, the quartet graduated with a master’s in music from the University of Victoria in Canada with an emphasis in string quartet repertoire. During the degree, the group studied with Joanna Hood and Sharon Stanis.

Alongside the quartet, Quijano, Alanís and Ivanov perform with the Xalapa Symphony Orchestra and Cruz performs with the University Orchestra of Popular Music.