A Honek cello and Pfretzschner bow, collectively valued at USD $5,500, has been stolen from a parked car in Prague

A stolen cello alert has been issued for a 1984 Alois Vincenc Honek cello, stolen in Prague, Czech Republic, in mid-January, 2020.

Police in Prague have released a video of a middle-aged man who stole a Honek cello in a Carbon Mac hard cello case, as well as a Pfretzschner cello bow, from a parked car in Vršovická Street, southeastern Prague. The combined value of the cello and bow is approximately 130,000 Czech Koruna (USD $5,500).

Having taken the cello, the man boarded the Prague Metro.

‘Cameras caught the man on the Metro, where he was travelling with the stolen cello. Just before that, he was caught on camera in the Eden shopping centre, where he was accompanied by another two men,’ said member of the Czech police force Jan Daněk.

These two men did not take part in the crime, however it appears that they knew the thief, so the Czech police is also welcoming any information about them. The penalty for the robbery is up to five years in prison.

The cello’s owner is Tereza Pelikánová and she is offering a reward for its return.

Czech Police have indicated they would like to speak with the man, pictured below, in regards to the incident. To watch a video of the theft, click here. 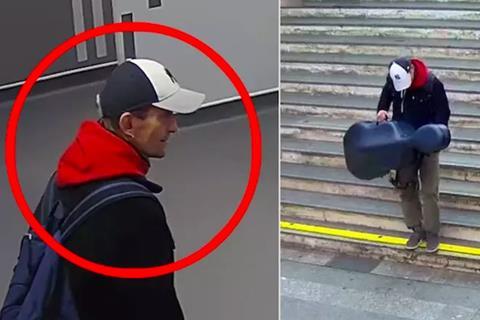