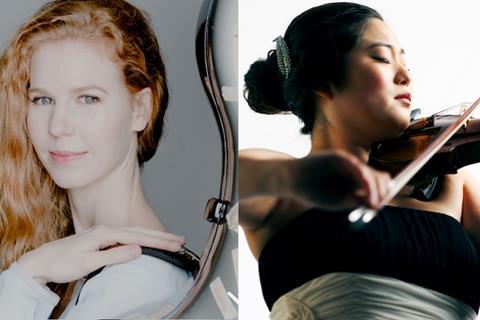 Marking its 30th anniversary this year, the Artemis Quartet will welcome two new members in June. Cellist Harriet Krijgh is to take over from founding member Eckart Runge, while violinist Suyoen Kim replaces Anthea Kreston. As with the original members, the two violinists Vineta Sareika and Suyoen Kim will alternate in the first chair position.

Kim was born in Münster in 1987, and received her first violin lessons when she was five years old. At the age of nine she enrolled at the Musikhochschule Münster – becoming the youngest conservatory student in Germany at the time – learning with Helge Slaatto. After receiving her degree, she continued her studies with Ana Chumachenco, graduating from the Hochschule für Musik und Theater München with a Masters in 2010, and from the Kronberg Academy in 2012.

Since then, she has performed regularly as a soloist with renowned orchestras and conductors as well as with numerous chamber music partners, and, at the beginning of 2018, took on the role of first concertmaster of the Konzerthausorchester Berlin. The Artemis Quartet will be the first chamber music ensemble in which she holds a permanent position.

Born in the Netherlands in 1991, Krijgh received her first instrumental tuition at the age of five, and after initial studies at the conservatoire in Utrecht, moved to Vienna in 2004 to study cello with Lilia Schulz-Bayrova at the Music and Arts University of the City of Vienna. A winner of numerous competitions, she was named a ‘Rising Star’ by the European Concert Hall Organisation (ECHO); and in 2017, assumed the role of Artistic Director of the International Chamber Music Festival Utrecht, taking over from Janine Jansen.

Alongside her international solo appearances, Harriet Krijgh is a regular chamber music partner of Baiba Skride, Laura Skride and Lise Berthaud. She also collaborates with the Pavel Haas Quartet. In April 2018, Harriet Krijgh signed an exclusive recording contract with Deutsche Grammophon. The first release, featuring works by Vivaldi, is planned for autumn 2019.

Gregor Sigl, the ensemble’s violist, said: ‘We are delighted and hugely excited to welcome Suyoen Kim and Harriet Krijgh, two wonderful musical personalities and outstanding instrumentalists, to the Artemis Quartet! As with previous changes, we now face the challenge once again of preserving the musical heritage of all previous members of the Artemis Quartet – a legacy of unconditional commitment going back more than thirty years – with our new partners. At the same time, in our common pursuit of musical excellence, we aim to challenge this legacy and expand on it.’

The Artemis Quartet will perform eight concerts throughout Europe in May and June 2019, both to celebrate its 30th anniversary and also to introduce the two new members. For each concert, the first part of the programme will feature works for string sextet, with departing members Anthea Kreston and Eckart Runge as guests. The second part presents the quartet exclusively in its new line-up of Vineta Sareika, Suyoen Kim, Gregor Sigl and Harriet Krijgh.

The first anniversary concert takes place in Bremen on 2 May. Further performances are planned in Berlin, Munich and Vienna, as well as in Paris, and at the Schwetzingen Festival.