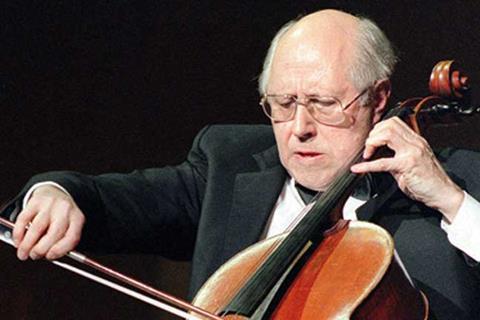 During the post-war period few musical virtuosi attained world fame as rapidly as the Russian cellist Mstislav Rostropovich. Born the son of a cellist in the Azerbaijani province of Baku, 1927, Rostropovich started to teach himself by copying his father’s actions at the instrument. At the age of sixteen he entered the Moscow Conservatory where he studied with Kozolupov and composition with Shebalin and Shostakovich. At 23 he was awarded the Stalin Prize, at the time considered to be the highest distinction in the Soviet Union. He worked with several Soviet composers throughout his career but was a staunch advocate of human rights, resulting in his harassment and eventual exile by the Soviet authorities in 1974.