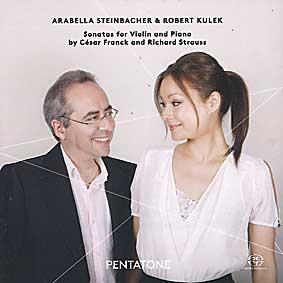 Having largely built her recording career in the realm of 20th-century composers, Arabella Steinbacher returns to her roots and a work with which she first fell in love in childhood, Mozart’s G major Concerto. For her first recording of the piece she has chosen to partner an outstanding chamber orchestra, which creates crisp and transparent textures, and combines swagger with an admirable lightness of touch in the outer movements. Never hidebound in her approach, Steinbacher uses a rapid vibrato to sweeten her tone, a feature that may separate her from period devotees who would also point to her stretching of phrases in the central Adagios, which become predictable.

Having used Wolfgang Schneiderhan’s delightfully witty cadenza in the first movement, she moves to the more familiar ones from Joseph Joachim for the following two concertos, her personal approach adding interest to their content. The orchestral joie de vivre that opens the Fourth and Fifth concertos carries over to Steinbacher’s entries as she engages with the young Mozart’s playfulness – the rondo finales, taken quite quickly, bounce along in pure happiness.

All highly enjoyable but some way from period-instrument performances where Andrew Manze (Harmonia Mundi) is my choice. Pentatone’s sound quality is superb.