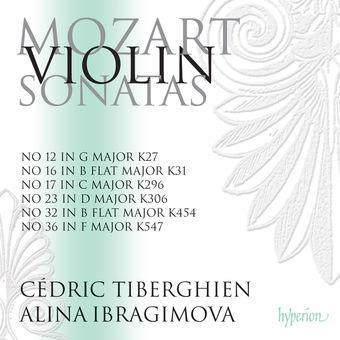 This seasoned duo’s two-disc-for-one Mozart package takes in six works spanning more than 20 years from the two juvenile essays (K27, K31) of 1766 to his final sonata, K547 (‘For Beginners’), of 1788. It is true to its ‘for keyboard and violin’ billing, because pianist Cédric Tiberghien’s contribution sounds consistently more prominent than that of his partner. Such a recorded imbalance may be intentional, given the overall lesser significance of the violin part in most of these works; but it is a miscalculation in the more equitably matched K454, where Ibragimova seemingly underplays the grandeur of its introductory Largo and is too distant in its playful Allegro and jovial rondo. Even in the expressive, more violin-centric Andante, one begs a more balanced listening experience.

Nevertheless, these two outstanding Mozartians give characteristically intelligent, individual and invigorating accounts on modern instruments. They demonstrate unanimity of intent, refined musicianship, alert, vital phrasing and excellent timing; sample the buoyant rhythms and crisply articulated passagework of the outer movements of K296 and the honeyed cantilena of its Andante sostenuto. They bring out the full quirkiness of the two early sonatas, Ibragimova introducing some playful interpolations into the Allegro of K31. Both players skilfully characterise its Tempo di menuetto variations.

Their reading of K547 is persuasive, Ibragimova adding subtleties of nuance and rubato and occasionally taking some of the limelight. Her silky-toned, lyrical playing in the expressive central movement of K306 is an aural delight, and both protagonists revel in the humour, drama and sheer invention of the ensuing operatic finale.