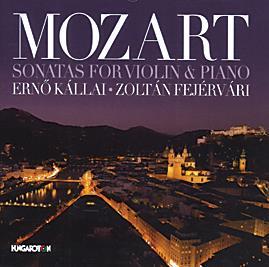 In many ways, this is a conventional disc: the Mozart duos are of course much recorded, and Halvorsen’s virtuosic Passacaglia is an established if old-fashioned repertoire choice. Yet even with the novelty of a little-known work by Norwegian composer Bjarne Brustad (1895–1978), the orthodox modern performance style by Elise Bätnes and Henninge Bätnes Landaas compounds the impression of a disc that offers few surprises.

But conventional wisdom can be fulfilling. Both players, members of the Oslo Philharmonic Orchestra (Elise Bätnes is its first concertmaster and Bätnes Landaas additionally holds the Norwegian Grammy, Diapason d’Or and Grieg Prize), offer direct musicianship. Once one gets used to the over-reverberant sound, the Mozart duos are delivered in a lively way, with brisk tempos in the outer movements of K423, for example, and a real sense of atmosphere in its slow movement, even if the introduction to K424 seems pedantic. Brustad’s Capricci of 1931 is an effective essay in a tonal 20th-century idiom, with a rough-hewn quality to it that is engaging in this performance, while Halvorsen’s riotous variations are taken at a cracking pace with great technical accuracy.