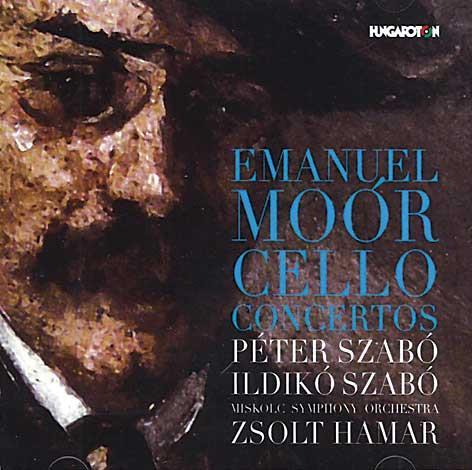 In 1910 Pablo Casals made his Viennese debut playing the second cello concerto of his friend, the irascible Hungarian Emanuel Moór. Casals and Moór had met in 1905 and the friendship flowered until the outset of World War I, resulting in a rich harvest of cello works, which Casals considered works of genius – a judgement that you might question after hearing this all-Hungarian disc.

Péter Szabó, long-time principal cellist of the Budapest Festival Orchestra, is joined by his daughter Ildikó for a double concerto regularly performed by Casals and his regular partner Guilhermina Suggia. The two unite in organ-like sustained chords in the first movement and play a lovely, weaving duet in the Adagio, though sadly the balance fails to showcase their nicely blended sound.

The solo cello comes across better in Concerto no.2, although the sound quality throughout is rather lacking in subtlety. Moór’s lyrical passages are irrefutably beautiful and Szabó is a passionate advocate for them, but the composer seems incapable of sustaining a fast movement for long before lapsing into reflection.

The more successful op.123 Prelude, like the Second Concerto’s Adagio, makes reference to Bach, with cross-string playing over pedal notes reminiscent of the C major Prelude. Szabó’s playing is expansive here, though his cello fails to sing on the very highest notes.