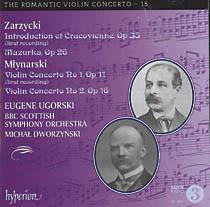 Young Russian violinist Eugene Ugorski is a dynamic, agile and committed advocate of Mlynarski’s challenging concertos. He displays an impressive range of colour and attack in no.1, from the dramatic opening movement, through the virtuoso cadenza and the melodious Adagio to the vibrant, dance-influenced finale. He impresses further in the Second Concerto, particularly in its impassioned developmental cadenza, brilliantly executed, its rhapsodic nocturnal Andante based on a popular song, and its folksy bravura finale. He has a tendency to force his tone, particularly in impassioned passages or in double- and multiple-stopping. Equally, though, he demonstrates some enviable subtleties of bowing technique in more delicate, quieter moments.

Zarzycki’s two pieces are very much in the Wieniawski mould. Ugorski is lyrical and reflective in the Introduction, but he brings the Cracovienne and the Mazurka immediately to life, demonstrating extraordinary digital facility and bow control. Michal Dworzy?ski supports his soloist admirably at every twist and turn, but the recorded sound is not from Hyperion’s top drawer.