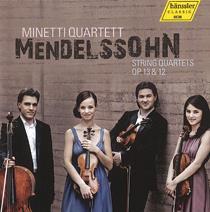 Mendelssohn’s string quartets are currently enjoying considerable popularity both in the concert hall and on disc. This new recording comes from the Austrian-based Minetti Quartet, a young group that has already achieved success in several major quartet competitions. In age the players have much in common with Mendelssohn at the time of the quartets’ writing, but they avoid the trap of viewing the music, as was often been the case in years past, as coming from the composer of A Midsummer Night’s Dream. Instead, they look for the profound effect Beethoven had on the young man, and as a result the many changing moods in the opening to the E flat major Quartet are most effectively captured. The players are equally persuasive in the drama that opens the Presto finale of the A minor work, having offered a charming account of the previous Intermezzo.

Yet with so many versions available on disc, comparisons are inevitable, and when one takes, for instance, the finale of op.12, there’s no competition with the Mandelring Quartet, whose recent Audite recording (reviewed in September) swept me off my feet. At the same time, the Minetti’s intonation and articulation fall just short of the Mandelring’s impeccable standards. The recorded sound is good, but at a mere 51 minutes the disc offers a very short total playing time.