Meditation (not from Thaïs) for musicians

Violist Matthew Jones discusses the ways in which meditation and mindfulness can help performers, as he prepares for his ‘Music and Silence’ concert at the Vale of Glamorgan Festival 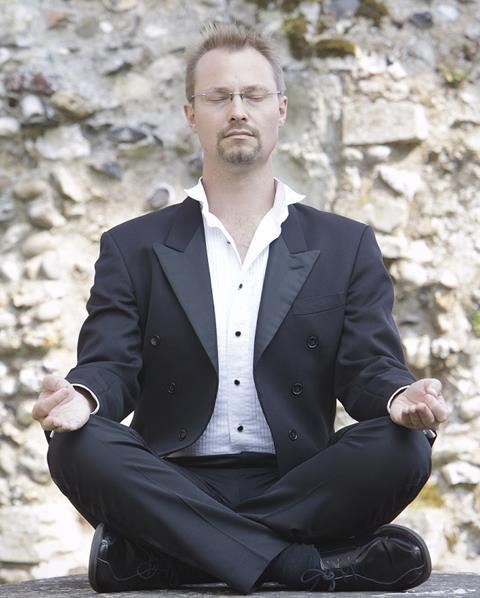 Growing up in South Wales, I marvelled at the Vale of Glamorgan Festival’s extraordinary programming and calibre of performers, so I naturally jumped at the chance to return to the festival to play solo viola works in a concert of ‘Music and Silence’ and to present an introduction to meditation techniques and how they affect the way we listen to music.

My exposure to meditation, through a long period of injury some 20 years ago, made me aware of the huge array of benefits to musicians, both at and away from the instrument. It helps to promote peace, balance and calm in the musician's life (which is often hectic, overwhelming and stressful). It offers practical tools to aid with pretty much any situation, not least to find a centred, focused place in oneself just before, or during, a performance. The form I now teach, Kundalini meditation, helped me enormously in my recovery from injury and brings me ever closer to my goal of transmitting music in performance without resistance and to managing my energy in the complex balance of performing, teaching and family life.

When we meditate, we become able to direct our attention and balance our sensitivities, to become aware of the connections between stimulus and reaction, mind and body, and to feel more at peace with ourselves and whatever or whomever may be around us.

One of the very simplest breath-meditation techniques to use before a performance can help to counterbalance unwanted effects of the ‘stress’ or ‘fight/flight response’ – ‘2:1 breathing’ for 3-5 minutes. In a calm seated position (or if you have no space, standing is fine!), breathing only through the nose, gradually make the exhale twice as long as the inhale, as slow and deep as is comfortable without forcing the breath or tensing the shoulders. I use this, as well as a Kundalini meditation named ‘Kirtan Kriya’, before every performance, and have found these simple practices transformational.

Mindfulness, the practice of bringing one’s attention to the internal and external experiences occurring in the present moment, has become popular with, and proved enormously beneficial for, musicians in recent years. As simple a practice as a brief walking meditation while entering the stage can alter a performance significantly.

Similarly, choosing where to direct our attention during a performance can bring great changes - whether we choose this focus to be the emotion we are expressing with a phrase, the awareness of the floor, the quality of the sound or the depth of our breath.

In performance the heightened state of awareness changes our instinctive sense of the passage of time in a small but significant way (amongst many other changes). Silences (whether pauses, written bars of silence or gaps between movements) are almost always shorter than we perceive them, and chosen tempos are often up to 5% faster (even 10% in some cases) to the point that the total musical part of a recital is often several minutes shorter than a pre-concert run-through. The use of these silences to bring ourselves back to the present moment can reduce the tendency to rush and any associated panic (though it is always advisable to practise fast passages up to 10% faster than final tempo so the mind cannot question your ability to play it under stress).

Danish composer Per Nørgård’s ‘Sonata - The Secret Melody’, part of which I will play in the ‘Music and Silence’ concert on 11 May, contains an unusually long silence within the final movement. While I firmly believe that in music, not to play is as much an act as to play, I find it fascinating that in some performances of the Nørgård I have cherished this prolonged eight-second silence, while in others I have worried that the audience think I’m lost, or that they’re bored, or that they might think the piece is over and start to clap… So I cannot wait to see how they, and I, will react to a programmed five-minute silence at the end of each work in the concert! Nørgård will be joined by Hilary Tann’s haunting ‘The Cresset Stone: A Meditation for Solo Viola’ and solo cello works by Vasks, Tavener and Reich performed by Alice Neary.

Described recently as ‘the finest violist since William Primrose’, Matthew Jones is a violist and violinist with a catalogue of over 20 solo and chamber discs, professor of viola and acting head of chamber music at the Guildhall School of Music and Drama, violinist with Ensemble MidtVest and a teacher of the Alexander Technique, Kundalini Yoga and Meditation, and Performance Wellness.

Matthew will perform at the Vale of Glamorgan Festival (10-20 May) on 11 May 2016 in the ‘Music and Silence’ concert, and with Ensemble Midtvest on 18 May in a concert celebrating the music of the festival’s artistic director, John Metcalf.

Additionally, Matthew will be teaching both viola and yoga/meditation/Alexander Technique at the Advanced Viola and Performance Health course at the Guildhall School from 22 to 24 July 2016.