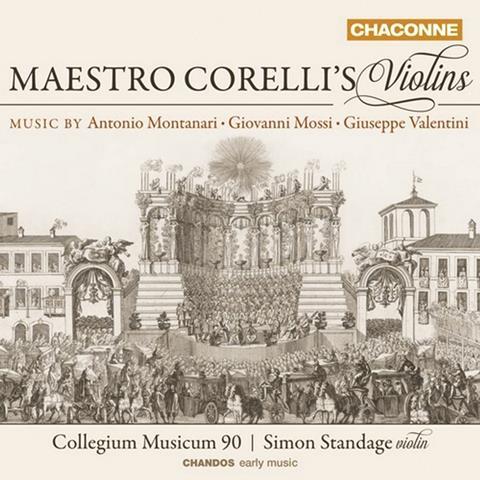 This disc’s principal Corellian connection is that its three featured violinist-composers played for Corelli when he directed the premiere of Handel’s La Resurrezione in Rome (1708). No work by Corelli is included; instead there are six different takes on the concerto grosso principle, exploiting various concertino combinations and much contrapuntal, textural and harmonic adventure. Simon Standage and Collegium Musicum 90 respond spontaneously to these concertos’ wide terms of stylistic reference, offering buoyant, poised and technically assured period instrument performances. They make all the music’s gestures count, from the outlandish chromaticism in the penultimate movement of Valentini’s op.7 no.11 to the astonishing modulations in its finale, the quirky opening of Montanari’s op.1 no.6 and the intensely expressive Adagio of Mossi’s op.4 no.11. They offer lively, crisply articulated performances, with fugues such as the second movements of the Valentini and Montanari op.1 no.6 benefiting from lucid textures; and Elizabeth Kenny’s archlute in Valentini’s op.7 no.11 and the viola-less concerto op.4 no.12 by Mossi frequently add colourful, muscular fundament to Nicholas Parle’s driving harpsichord continuo.  Some uncomfortable moments apart, notably in Montanari’s op.1 nos.6 and 7, these accounts are thoughtfully prepared, neat and tasteful. The well-balanced recording is crystal clear, its church acoustic adding plenty of bloom. ROBIN STOWELL