For decades, debate has raged over whether instrument cases were ever made in Stradivari’s workshop. Now, a template has come to light that apparently proves that they were, writes Glenn Wood 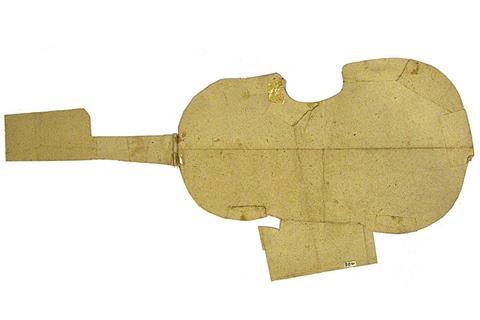 This text from The Strad’s March 2018 issue is part of a larger focus by Glenn Wood and Dimitri Musafia on their latest discoveries regarding case making in the Stradivari workshop. To read the full article, download the issue now on desktop computer or via the The Strad App, or buy the print edition

In 2016 I was contacted by Dimitri Musafia regarding a template housed in the Museo del Violino in Cremona, Italy, under the custodianship of Fausto Cacciatori. The template was listed in the inventory of Stradivari’s tools and effects as being a design for a viola d’amore, but while compiling the recently published catalogue, Cacciatori was not convinced by the original catalogue description. He turned to Marcello Ive, a master luthier who has built some splendid violas d’amore, for a second opinion. Ive saw that the template was too small to be associated with violas d’amore, and thought that it looked more like something regarding a case, so he called Dimitri Musafia, who in turn contacted me.

In the April 2008 edition of The Strad, Dimitri and I proposed that Antonio Stradivari personally assisted in the design of violin cases as we know them today. This assertion was based on the simple observation that his violins show no signs of the wear patterns associated with the use of so-called holster cases. This type of case tends to cause abrasion to the back of the scroll each time the violin is slid into it, and carelessly introduced bows cause damage to the belly of the violin. There is strong evidence that Stradivari made some of these holster cases but probably only in the early part of his career, whereas later, this early type of holster case seemingly fell from favour and we see the emergence of the double violin case, of which the below is a good example. 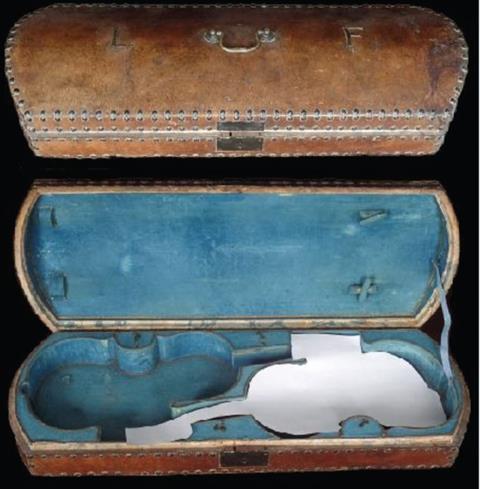 This case, although fairly prosaic when seen from the outside (in spite of being embellished with the initials ‘L.F.’), proves to be more refined when seen from the inside. It is lined with blue-coloured suede with the form of the violins picked out with fine gold braid. There are other double violin cases with a stronger claim to having been created in the Stradivari workshop but this was the case on which we conducted the experiment described below.

Having frequently pondered on the most efficient way to pack two violins into a single case, we realised a possible alternative purpose for the template. Firstly, we should mention that during the early part of the 18th century, it became increasingly common to own two violins instead of one. Luthiers have informed us that two violins can be completed in little more than the time required to make one. This is because there are processes in their production, such as gluing and varnishing, that require waiting time which can be put to good use by working on a second violin. Moreover, the demand for pairs of instruments increased. This is due, in part, to the unreliability of the gut strings of the period, which were apt to break. Thus, players, especially soloists, needed to have a back-up instrument tuned at the ready in case of an emergency during a performance. A dimensionally accurate copy of the original template was made and, as can be seen from the above image, it fits fairly snugly into the recess for one of the violins. It can be readily seen that the template in the form of a violin outline with rectangular projections located on opposite sides of the pegbox and C-bout neatly serves the purpose of acting as a guide for the construction of a double violin case.

We have long argued that Stradivari himself made these cases and the template from the Stradivari collection further strengthens that view.

To see the full article including Dimitri Musafia’s presentation of the evidence and what it reveals, plus more photos, download the issue on desktop computer or via the The Strad App, or buy the print edition