Our 2019 calendar brings together twelve of the finest instruments ever made by Antonio Stradivari, all of which were on display at the Tokyo Stradivarius Festival, where the video below was taken. Text by Alessandra Barabaschi 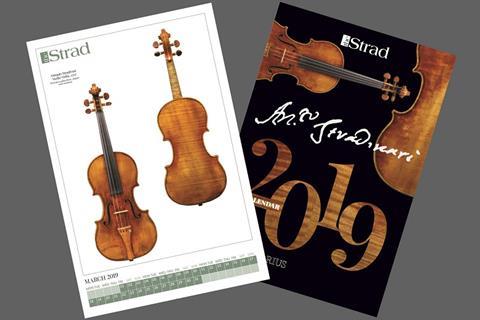 Stradivari appears to have been active in his workshop for most of his life, but it is nowadays widely acknowledged that at least two of his sons assisted him: Francesco and Omobono. Probably bedazzled by Antonio’s craftsmanship, experts in the past have often minimised the contribution of his assistants.

Towry Piper, in the December 1911 edition of The Strad, was among the first to present their work in a good light. In his opinion, Omobono was ‘entitled to rank amongst the great masters of his craft’. Over time, many have come to appreciate the (sadly) rare instruments of the two brothers.

Although the 1707 ‘Stella’ violin (currently owned by Japanese violinist Eijin Nimura) is a typical specimen of Antonio’s work from the period 1705–10, some remarkable details reveal the contribution of his talented sons. The scroll in particular is full of character and shows signs of Omobono’s hand – such as the rather open throat, typical of his work. The name of the violin is linked with its distinctive acoustic qualities: apparently, a past owner reckoned that it ‘twinkled like a star’.