Stradivari and the sharkskin sandpaper 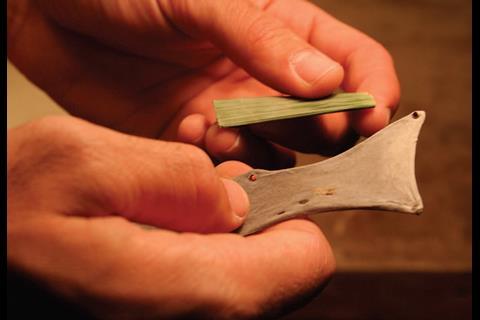 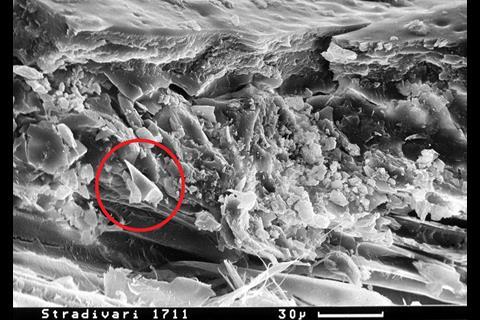 Image made with a scanning electron microscope, showing a detail of a 1711 Stradivari cello. The ground layer shows a possible dermal denticle Photo: C.Y.Barlow/J.Woodhouse 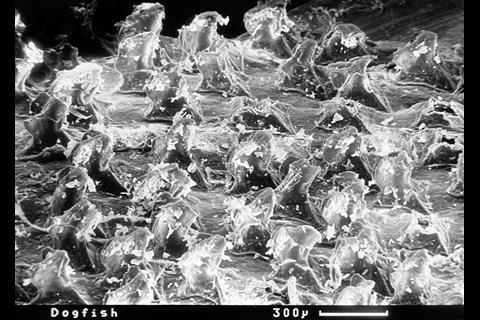 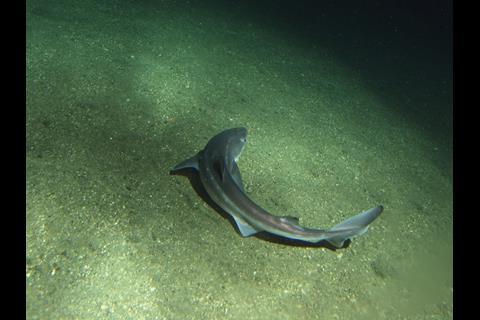 This microscope image of what looks like a shark’s tooth embedded in a 1711 cell is evidence of dogfish skin, writes Joseph Campanella Cleary

Woodworkers have used equisetum, a reed-like plant commonly referred to as horsetail (figure 1), as a natural burnisher for centuries. The skin of the dogfish, a type of small shark, is another highly effective material for burnishing.

In fact, Roger Hargrave, who has provided many useful observations on traditional technique, has expressed a preference for dogfish skin to smooth the violin edges. The material, however, is somewhat inconvenient to obtain and prepare: one does not have to search long to find recipes that call for soaking the skin in urine before scraping the remaining flesh.

Because of the dermal denticles — tiny tooth-like structures — on the surface of the skin, the material is another directional abrasive or burnisher. Just as with equisetum, this natural burnisher varies from species to species, and its quality also depends on the age and size of the fish. A small shark or dogfish could have dermal denticles that approximate 80—220 grit, and which cut in one direction and burnish in the other.

If softened through tanning, the skin becomes more usable but the raw hide can also be mounted on wood to make a file or a rasp-like tool. In 1989 researchers Claire Barlow and James Woodhouse published photos of varnish from historic instruments, made with a scanning electron microscope (SEM).

These included images of a sample from the rib of a 1711 Stradivari violin, which revealed an ‘unknown foreign object’ at the level of the varnish—wood interface (figure 2). When I questioned Woodhouse about the particle in his sample, he agreed that it seemed to match the form and size of the tip of a shark’s dermal denticle, and that it corresponded with the most likely location for the artifact to be found (beneath the varnish layer).

Barlow and Woodhouse also burnished wood with dogfish skin, and took SEM photos of the worn tips, finding evidence of similar damage and dulling (figure 3). Although far from conclusive, it presents the tantalising possibility of historic use. In today’s workshops, however, luthiers must decide if the practical benefits outweigh the difficulties in preparation — as well as the ethical considerations.