In the footsteps of masters: Postcard from Paris

As well as a rich selection of concerts and masterclasses, the Philharmonie de Paris’ tenth String Quartet Biennale included its first ever lutherie competition, as Mélissa Lesnie reports 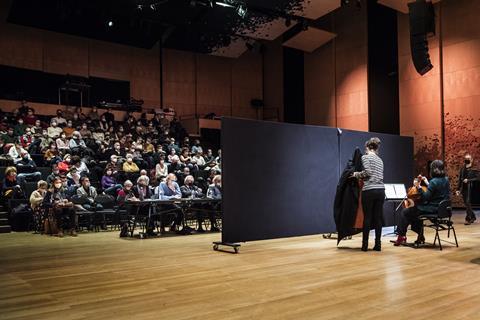 From 12 to 23 January, the sprawling Philharmonie de Paris complex in the 19th arrondissement of the city became something of a playground for string players and lovers of chamber music during its tenth String Quartet Biennale. The grey Paris sky seemed to camouflage the mirrored, metallic facade of the building as I headed towards the Studio on a Saturday morning to sit in on the finals of the inaugural International Lutherie Competition’s young talent category. Coinciding with the latter part of the biennale (from 19 January), the competition took place under the auspices of the Philharmonie’s Musée de la Musique and the Talents & Violon’celles institution, and featured presenters Sol Gabetta and Raphaël Merlin of the Ébène Quartet. For 2022, the new competition focused on the cello.

Several rounds of blind auditions were held for more than a hundred instruments examined across two categories: Talents d’Aujourd’hui (89 established luthiers, each invited to submit a cello made within the past two years); and Talents de Demain (an up-and-coming generation of makers, with 26 individual contestants, plus duos and groups from six lutherie schools). The challenge issued to the young talent category was to produce a copy of Venetian master Matteo Gofriller’s 1710 instrument housed in the Musée de la Musique’s collection, a specimen prized for its finely carved f-holes and deep red varnish, and a tough act to follow for these young luthiers for whom, in most cases, their submission was their first completed instrument.

Entering the Studio, I was greeted by the backs of seven members of the jury (including cellists Astrig Siranossian and Raphaël Pidoux and luthier Jean-Jacques Rampal) as they contemplated the black screen in front of them. A group of cellists from the Orchestre de Paris had 30 minutes to discover each of the five finalist instruments – identified only by a letter and a number – before presenting them to the jury from behind this screen. We heard musical fragments chosen to bring out different qualities across the range of each cello: part of the Prelude from Bach’s Suite no.3 for scalic figures; a section from Dvořák’s Cello Concerto for low, double-stopped resonance; and finally some Haydn for agility.

’Blind auditions were held for more than a hundred instruments’

Between the excerpts, a solemn, silent ballet took place: the introduction of the subsequent contestant, shrouded under a black sheet, from one side of the screen, then the stealthy removal of the outgoing one (also shrouded) as the next number was called: ‘Le violoncelle B10… Le violoncelle B20…’

As I listened, it occurred to me that even the competing luthiers in the room surely could not know for sure which melody resonated from their own creation. A woman in my row was taking notes, concentrating as intensely as the members of the jury. She explained that she was an amateur cellist but took great interest in the process of analysing the sound of each instrument. I closed my eyes, letting the elements wash over me: brightness, clarity, projection – keeping an ear out for wolf notes.

Several luthiers seated in the Studio were doing the same. I chatted with Michael Kijowski, visiting Paris for the first time from Chicago to take part in the competition. I asked if he had a favourite, but he was reluctant to commit, explaining that after a certain amount of active listening the characteristics of each instrument began to blend together and seem less distinctive.

As the jury deliberated in another room, the cellos were revealed to the public and played again by a member of the orchestra, since the visual impact of the instrument can undoubtedly alter our perception of the sound. It struck me that the gender balance of the student finalists was more or less equal, and that they came from a wide range of countries.

The verdict? Cello ‘B40’, from the school in Brienz, Switzerland (Lejla Fassler and Adrian Pfeiffer), stood out to the ears of the jury, to the tune of €15,000 (£12,600) for its acquisition for the Musée de la Musique’s collection of copies. Second prize was awarded to the French Mirecourt school – a collaboration between seven students of the class, which made me wonder if it was fair that this instrument could be in competition with solo and duo creations. The Antwerp school won third prize with an instrument by Ilze de Ligt and Joshua Hermans.

In a time when the lutherie profession has greatly suffered owing to pandemic-related restrictions, the new lutherie competition demonstrates that the industry is as vibrant as ever with no shortage of young talent. For the 2024 edition, the spotlight will be on the violin.

Apart from the lutherie competition, there was plenty more on offer during this milestone tenth edition of the Biennale. One could explore the Musical Instrument Museum before hearing a relatively young quartet in the intimate, underground Amphithéâtre of the Cité de la Musique. There would be time to catch the evening’s quartet performance in the larger Salle des Concerts. 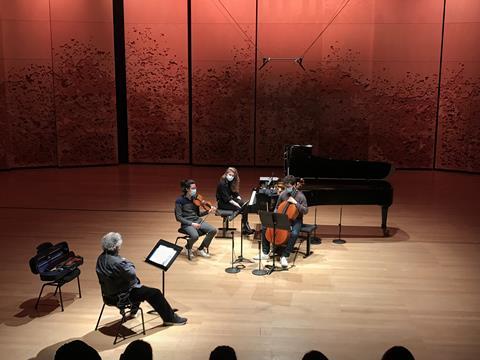 Irvine Arditti takes a masterclass with the Trio Ernest

There was a special focus on composer Philippe Manoury, who turns 70 in June and whose entire mature output of four string quartets was programmed for the occasion (though the Diotima Quartet’s performance of the second quartet, Tensio, for strings and electronics fell victim to Covid-19). The natural partners for this tribute were biennale veterans the Arditti Quartet, which had premiered three of Manoury’s four quartets between 2010 and 2016. Thus we heard them in Manoury’s first quartet, Stringendo, with its pizzicato ‘imaginary metronomes’, and in his fourth, Fragmenti, comprising eleven miniatures that reel between Ligeti-esque turbulence and long, muted, meditative tones. The third quartet, Melencolia (inspired by Dürer’s engraving), saw the Arditti playing crotales, adding entrancing delicacy following more agitated double-stopped and tremolo outbursts.

Bookended by two Manoury works was a short premiere commissioned by the Philharmonie de Paris from 28-year-old composer Clara Olivares: Spatiphyllum’s Supreme Silence, inspired by her imagined observations of the imperceptible sound world of a house plant – a by-product of Covid-19 lockdowns if there ever was one. The musicians’ riveting concentration and precision was, as always, the most exciting thing about the Arditti performances.

Over and above the concerts, the highlight of this biennale for me was Irvine Arditti’s masterclass with the Swiss ensemble Trio Ernest. Seated on the stage in front of the score and facing the young musicians, the violinist worked with them almost bar by bar through Wolfgang Rihm’s thorny Fremde Szene III (1984). His warmth and disarming humour belied his unwavering and meticulous devotion to the score – no detail could escape those honed ears. His comments were often more human than technical: ‘Why don’t you do the nasty bar 23? It’s not nasty enough – you’ve got to think of someone you really hate!’ The most technical remarks regarding how to attack a sforzando or the precision of harmonics (‘Can you whistle it or something?’) were always tempered with good-humoured humility: ‘I’m always right… Except when I’m not!’ The session offered invaluable insights into how both young and experienced musicians might approach a contemporary score.

In addition to the Arditti, several returning quartets complemented a rich programme, with Dvořák as the second composer in focus. I took in the Arod Quartet’s vibrant Bartók String Quartet no.3, Dvořák’s String Sextet with the Jerusalem Quartet and guests, violist Miguel da Silva and cellist Gary Hoffman, and a darkly majestic Shostakovich Quartet no.2 from the Borodin Quartet. And although the much-anticipated finale featuring the Ébène and Belcea quartets in the Mendelssohn and Enescu octets was not to be, with two members of the Ébènes testing positive for Covid, the tenth String Quartet Biennale was one to remember for all the best reasons.