Analysis April 2022: Seeing the wood for the trees

10
Hardwood alternatives from natural options to advances in synthetics
Lutherie

Hardwood alternatives from natural options to advances in synthetics

Following CITES’ restrictions on the trade of rosewoods at the beginning of this year, there are those in the musical instrument industry who fear that ebony may be next. Peter Somerford looks at the alternatives to ebony and other exotic hardwoods being developed by a handful of intrepid manufacturers 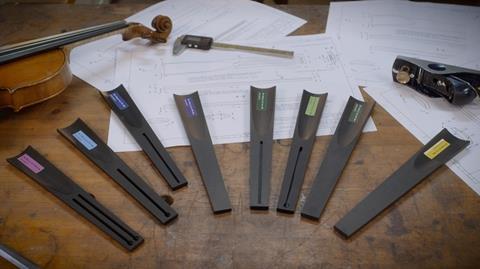 A range of Corene fingerboards

Can you imagine the violin world without tropical hardwoods? A world without rosewood or ebony fittings, and no new ebony fingerboards? It’s a scenario that no one wants to see materialise. But without sustainable harvesting and carefully regulated trade, these cherished lutherie woods, which have been overexploited and in some countries illegally logged to feed the booming demand in China for luxury furniture, could become commercially unavailable in the future – if not extinct. The warning signs are here already: at the beginning of 2017 the Convention on International Trade in Endangered Species (CITES) implemented international trade restrictions on more than 250 species of rosewood (dalbergia), including such woods as cocobolo (dalbergia retusa) and African blackwood (dalbergia melanoxylon). The listing of dalbergia species in CITES Appendix II (Brazilian rosewood, dalbergia nigra, is already protected under the much more restrictive Appendix I) significantly offered no exemption for finished products, in contrast to past listings of woods such as pernambuco, where the regulations applied only to logs, sawn wood and veneers. If such a restriction were introduced for ebony, it could have far-reaching implications for musicians. At present, only ebony from Madagascar is listed in CITES Appendix II, but some in the musical instrument industry believe it is only a matter of time before the listing is widened to include all black woods, if only because of ebony’s similarity in appearance to African blackwood and the tendency of CITES regulations to restrict certain woods – even though they might not be endangered – if they look similar to other woods from the same family. Fortunately, there are more than a few forward-looking makers and manufacturers who have been developing alternatives to ebony and other exotic hardwoods, using both natural and synthetic materials.At the commercial level, there are already student instruments available that eschew tropical hardwoods. Gewa’s ‘Pure Flaxwood’ violin has a fingerboard and upper nut made of flaxwood, a wood fibre composite developed in Finland and used in the guitar industry for more than ten years. Gewa also offers a range of fingerboards made from the material. ‘Flaxwood is a good alternative to ebony,’ says a spokesman for the German manufacturer. ‘It’s very easy to process. It can, however, make overtones stronger, and the sound is not as mellow as wood.’

Roderich Paesold is another German manufacturer that offers an instrument completely free from exotic hardwoods. Its Green World violin incorporates a chin rest, tailpiece and geared pegs all manufactured by Wittner from a composite material. The end-button is European boxwood, the upper and lower nuts are vulcanised fibre, and the fingerboard is Corene, an ‘eco-composite’ ebony substitute. Violin maker John-Eric Traelnes, one of the co-founders of Neo-Ebène, the Swiss company behind Corene fingerboards, says that the material, which is made from paper fibres and a phenolic resin binder, is virtually indistinguishable from ebony in colour, feel and finish. It has a number of significant advantages, he claims: ‘The fingerboard doesn’t react to acid. When some people play a lot and sweat, it burns the wood. Corene doesn’t act like that. It also doesn’t move with humidity and temperature changes, and it’s more resistant to mechanical wear from the friction of the strings.’ Although Corene fingerboards are more expensive than those made of ebony, according to Traelnes there is minimal finishing required because they are supplied in a variety of weights, thicknesses and styles, and the player saves by not having to have the board regularly re-dressed. 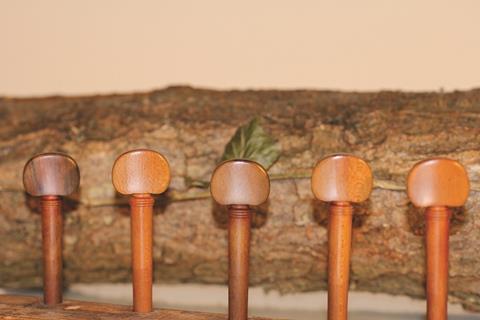 Traelnes also says that Neo-Ebène initially aimed for the student market, but that makers have begun using Corene boards for expensive instruments too. For Friedemann Pods, marketing manager at Paesold, the student market is absolutely where such alternative materials should be used. ‘If you want to conserve a Stradivari violin, use a traditional ebony board – that’s fine,’ he says. ‘But with limited natural resources, we should use alternatives wherever possible, and student violins or step-up instruments don’t need ebony.’A different strategy for producing ebony alternatives is to take sustainable softwood or hardwood and chemically modify it to give it ebony-like properties. Blackwood is one such product that’s established itself in the market. Its source is pinewood ( pinus radiata) grown in New Zealand, which is then processed in China using organic chemicals. ‘Blackwood is a very interesting material’, says Pods, ‘because of its acoustic quality. It also looks and feels good. But we have doubts about its surface hardness, and whether the resistance to steel strings will be sufficient over the long term.’ 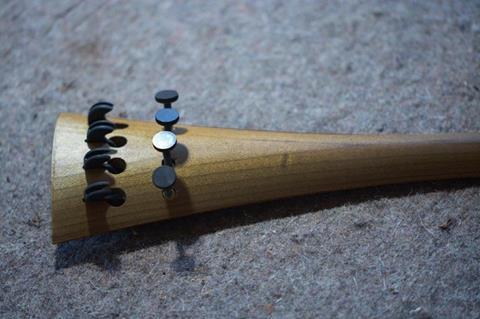 Scientists from the Swiss science and technology university ETH Zurich, with the support of the Gebert Rüf Foundation, have created an ebony substitute by modifying native maple. Their ‘Swiss Ebony’, which is being developed by the start-up Swiss Wood Solutions, is produced by first giving the maple an environmentally friendly mineral treatment in the form of a water bath, in order to improve its dimensional stability. Then the wood is compacted under pressure to increase its density, and to achieve a sound velocity that’s comparable to that of ebony. Heat treatment finally gives the wood a coffee-brown colour. Luthier Boris Haug, of Swiss violin shop Wilhelm Geigenbau, has been testing the densified wood over the past year and is encouraged by the results: ‘The tailpieces we’ve made look attractive, and sound-wise they work well. Densified wood is one of the most interesting alternative materials as it has low damping, which some of the composite materials don’t have. The biggest issue with the material is aesthetic – that it’s not black.’ Swiss Wood Solutions’ head of sales Karsten Leuker acknowledges the colour expectations of makers and players, and says: ‘We are testing a number of ways to make the material completely black, and have already had some promising results.’Tailpieces and pegs are often made with non-exotic woods that don’t need to be technologically modified at all. Although rosewood is a favourite peg material with some people, makers of artisan fittings also use traditional boxwood, as well as some native woods. British violin maker and fittings specialist Roger Hansell has been testing a range of native and sustainable woods in his North Yorkshire workshop. He already offers fittings in boxwood and plum, alongside such tropical hardwoods as ebony, cocobolo, African blackwood and rosewood, but is currently investigating British hedgerow woods including hawthorn and blackthorn, and other sustainable woods including olive and pear. ‘Olivewood makes beautiful-looking tailpieces,’ says Hansell. ‘It’s very stable and naturally oily, and it’s a wood that’s always available.’ While seeking to offer sustainable alternatives to his customers, Hansell is careful to ensure that any potential peg woods prove themselves over time. ‘With pegs, it’s not enough to choose a high-quality wood that looks good,’ he says. ‘It’s essential that it works well in the pegbox. And that’s why we’re putting pegs through an extensive period of testing, by fitting them in mocked-up pegboxes and giving them a turn every day to simulate how they’re going to operate in practice.’ 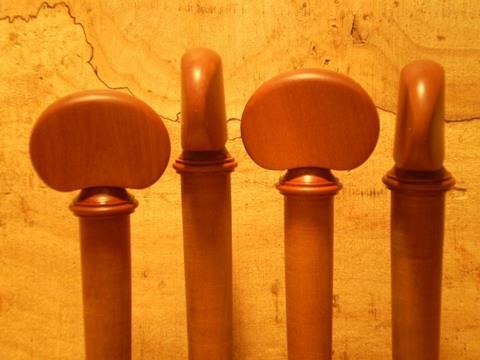 White also makes tailpieces and fingerboards from a composite that, unlike phenolic-based materials, boasts completely green credentials: it contains a resin that comes from cashew nutshell liquid, with recycled paper as the reinforcement. ‘One of the reasons why I chose this material is that it comes from a renewable source,’ he says. Another advantage of the composite, he notes, is that it is about twice as hard as ebony, which makes for a better-wearing fingerboard surface. Although it is as stiff as rosewood and boxwood, the material is not quite as stiff as ebony, and White says that whereas this slight difference in stiffness does not affect a tailpiece, it is more noticeable on a fingerboard. ‘The challenge with any composite is to come up with a material that shares the stiffness properties of ebony,’ he explains. ‘Wood has a very high stiffness-to-weight ratio, and it’s difficult to engineer a material to match it, unless you go to carbon fibre, from which it’s expensive to manufacture instrument parts.’ 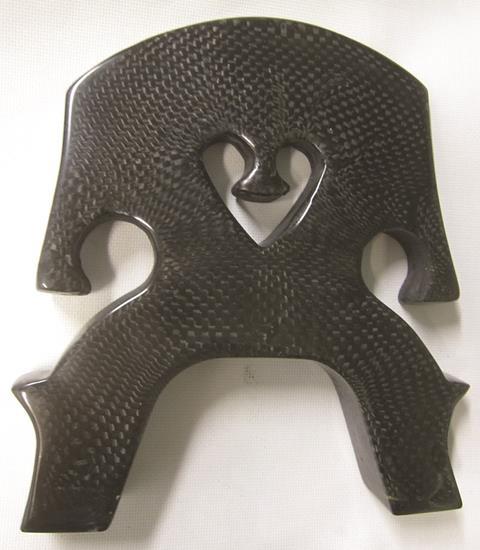 Carbon fibre is, however, already being used for tailpieces and fingerboards. These range from the high-end, custom-made carbon-fibre tailpieces introduced by New York-based cellist Kenneth Kuo in 2016, to the carbon graphite composite fingerboards manufactured by Sound Composites, a Eugene, Oregon-based company, whose president and head of research and development, Steve Mosher, made his first composite fingerboard in 1994. The Sound Composites fingerboards have a carbon-fibre core, with a thin layer of graphite-based tooling material over the arc and on the sides of the board. This allows the boards to be dressed, if needed, without the luthier having to make contact with any abrasive carbon fibres. A 1.5mm-thick maple veneer shim under the main carbon-fibre structure provides a gluing surface suitable for hide glue.

Stiffness may be the big advantage of carbon fibre, but can a carbon-fibre fingerboard be too stiff? ‘I don’t know exactly when a board, being pressed on, would be too stiff for the player,’ admits Mosher. ‘But for some people, the stiffer a board is, the better. The reason that stiffness can work well is that in many ways stiffness overcomes the requirement of mass. Our boards are about two-thirds the weight of equivalent ebony boards, because we don’t require the mass for stiffness that ebony requires.’

‘The biggest objection has always been and continues to be, “but it’s not wood”’ - Steve Mosher

Like other makers of composites, Mosher extols the durability and stability of his material, and its resistance to mechanical wear and changes in humidity and temperature. Despite such advantages over ebony, Mosher says that market acceptance of carbon fibre as a fingerboard material essentially comes down to consumer psychology. ‘People can see all the qualities that make total sense as to why the material is a good choice, but the biggest objection has always been and continues to be, “But it’s not wood.” So we’re still doing battle with tradition.’ Not only, then, do manufacturers need to offer a material that looks and feels like ebony, shares similar or superior properties and is available at a competitive price that’s acceptable to the wider market, but they also have to change players’ perceptions, and this can be difficult in the violin world. Generally speaking, this can be more conservative than the guitar market, for example, where adoption of alternative materials is already widespread. Ted White, for one, thinks that the mass market will only switch when it is forced to by restrictions and regulations: ‘Attitudes will probably not begin to change until people start stressing about not being able to get hold of ebony.’ And yet White, Traelnes, Mosher and others say they are successfully attracting some customers simply because of their products’ environmentally friendly credentials. The popularity of carbon-fibre bows, proving that endangered wood is not the only option, offers manufacturers further encouragement, and there are examples from other musical instrument industries too: if pianists can survive without ivory keys, cannot violinists use an alternative to ebony fingerboards?

Indeed, some makers see the present situation and the regulations on exotic woods as offering the violin world an opportunity for positive change. As Roger Hansell puts it, ‘This is as much an opportunity for change that will benefit the planet, as it is an inconvenience. After all, the tradition of violin making is one of continuous change.’

Analysis April 2022: Seeing the wood for the trees