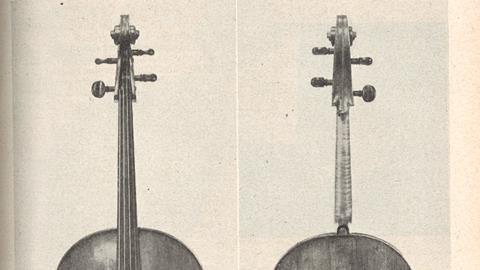 This illustration of a 1756 G.B. Gabrielli cello was published in The Strad, September 1953. The following text is extracted from an article accompanying the photographs:

Giovanni Baptista Gabrielli was one of the best of a numerous band of eighteenth century Florentine makers, which included Pietro Anselmo and Gasparo Assalone. He worked from about 1740 until the closing years of the century. He belonged to a large and important family of musical instrument makers. He was certainly the best maker of his family and his instruments compare favourably with those of the majority of makers who worked in Florence during his lifetime.

The Gabrielli illustrated is a particularly well preserved and typical example. It was made in 1756 and bears its original label. In many printed descriptions of this maker’s work writers stress the fact that Gabrielli only used the choicest wood. Although this is in the main true, there are a number of exceptions of which this cello is certainly one. Here the wood chosen for the back is remarkably plain, and furthermore the back is in four pieces. The only feasible explanation is that he considered that this particular plank of maple had outstanding acoustic properties that more than compensated for its lack of beauty.