From the archive: a 1792 viola by Venetian maker Anselmo Bellosio

In this extract from an article in the June 1992 issue of The Strad, John Dilworth takes a look at a small viola by the last of the great Venetian makers 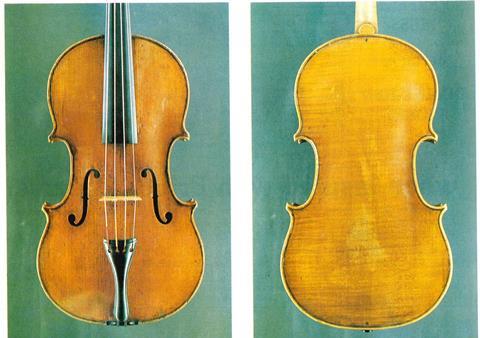 ‘Of that which once was great, is passed away’ runs Wordsworth’s epitaph for the city of Venice, which fell to Napoleon in 1796, bringing to an end the thousand-year republic. A small but certain part of Venice’s greatness was her tradition of violin making, which effectively had also passed away only three years before with the death in 1793 of her last great luthier, Anselmo Bellosio.

His work is comparatively rare, easily mistaken, and little documented. Given his great skill and delicacy and, most of all, the gorgeous varnish he used, long after it had disappeared from Cremona, this is a great shame. In Bellosio’s lifetime, the second half of the eighteenth century, the distinctive and individual styles of the great makers of Venice blended and merged. The great city drew in, and was vitalised by, craftsmen from outside, such as Peter Guarneri from Cremona, Carlo Tononi from Bologna, and Michele Deconet from Kehl near Strasbourg. The different styles of the great makers, Gofriller, Montagnana, and Serafin are as easily followed, one might think, as the Grand Canal, but other smaller channels cut across and between, mixing the waters and eddying currents. Other less gifted craftsmen came and went, leaving mysteriously hybrid instruments, which seem to defy attribution in any other way than that they are covered with the luscious dark red varnish that is the mark of Venice.

Instruments credited to Bellosio’s early years, before 1777 and the death of his master Giorgio Serafin [nephew of Sanctus], have even a pungent whiff of Peter Guarneri about them, with strong projecting corners, and slightly strangled and widely spaced f-holes. There are those too that have freer soundholes, recalling Bergonzi in style, in their wide spacing, set in a low, flat arch. One such violin bears an original label of 1776. Bellosio’s mature style, however, refers back even further, to the brothers Amati once more. There are few things that are consistent about his work, perhaps a tendency toward an apex in the outline at the back button, but the Amatise instruments are so superbly well made, that the mistake is often made that they come from the golden age of the previous century, rather than the declining days of classical Italian lutherie.

Bellosio’s most remarkable contribution today must be his small violas, of which at least three charming examples exist, two in almost mint condition, the back lengths between 387mm and 391mm. Only one, to my knowledge, bears its authentic label, but the three are so close in style that no more than a year or two could separate them all. The one label is from 1792, the year that the Gran Teatro La Fenice opened in Venice, and only a year before Bellosio’s own death. I cannot help but surmise that the founding of a new opera house brought with it commissions for new instruments, and especially for violas that could comfortably be managed, for La Fenice, like the other Opera houses, had no pit for the orchestra, who seem to have occupied the front stalls! Bellosio was by no means the first to make such a small viola; it was already common in England with the likes of Duke and Banks, and in Italy, Storioni and the Mantegazza brothers come to mind. The striking thing is that Bellosio’s violas still belong to the great unbroken tradition of Italian making, unlike their rivals. The geometry and purity of design and quality of the varnish, a tender, limpid golden orange, brook no arguments. They also mark a resurgence of the viola; as the Hills remark in their book on Stradivari, very few were made in Italy between 1700 and 1750. Gofriller seems to have been the only other Venetian to make a number of violas, and of the rest, I can think only of one each attributed to Montagnana and Peter Guarneri. 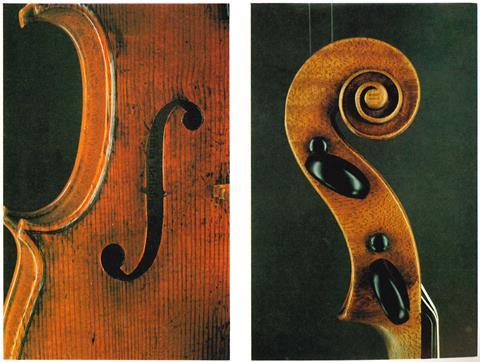 At least one of these Bellosio violas is regularly used by violin soloists moving into the viola repertoire, for whom its compact size is ideal. The sound the instrument gives out is in no way proportional to its size; I remember a debate that raged long in this magazine about the ‘ideal viola’; should it be 16”, or more? At one time in this country, the enormous ‘Tertis’ model — derived, incidentally, from the 17” Montagnana, played by Tertis — briefly held sway. What the Bellosio tells us is that the design, the manner in which all the dimensions are combined, is the key to a successful instrument, rather than one isolated measurement. In his viola, the top and middle bouts are both wide (190mm and 134mm respectively) compared to the lower bouts (225mm) which are shortened to give the small overall measurement. This gives a rather squat, square shape which is effectively disguised by the graceful flow of the outline. More importantly it provides ample air space focused at the centre bouts, and with the f-holes set well down the body, a good stop length of 219mm, similar to the ‘Macdonald’ and ‘Archinto’ Stradivari violas, which measure some 27 mm more in body length than the Bellosio. In other words, Bellosio has taken the outline of a much larger viola, and shortened the lower bouts to bring the bridge closer to the player; bowing and balance are more amenable, but a full resonant string length is retained. The 1792 instrument still has its original neck, which measured 134mm in length until it was blocked out to 143mm, closer to the accepted modern proportions of 2:3 neck to stop length. It is possible to construe a little more from this original neck; the angle of the face is still visible, and indicates that it was glued to the ribs at a similar angle to the present setting, which gives an elevation of 31mm. The neck was originally set flush to the top edge of the table, and would have given a height of no less than 26mm at the bridge. There is one nail hole visible in the neck root, but a great deal of knife scarring on the top ribs on either side, indicating that much shaping took place after the neck was glued.

Another idea, that a small viola should have deep ribs to compensate the lack of air space, is not borne out by this instrument. The middle and lower bout ribs are 33mm high, the top ribs tapering down to 30mm at the top block; more or less the same as a violin. One of the other Bellosio violas does have rather deeper ribs, at 37mm, but many great classical violas, by Stradivari and Maggini, for example, have comparatively low ribs without being compromised in sound.

The 1792 instrument has a very fine scroll. The craftsmanship is impeccable, and the design individual. The pegbox is short, deep and steeply curved. The sides remain flat virtually to the top of the volute, but thereafter the undercutting is deeply cupped, an unusual trait for an Italian instrument. The turns of the volute are very regular and extend an extra distance up behind the eye, emphasised by a strong chamfer. The finish is superb; the deep fluting of the back of the pegbox ends in needle sharp corners at the chin, and traces of a scribed centre line are still visible. The central spine stands proud of the edges around the back of the pegbox, indicating that the chamfers were put on last. 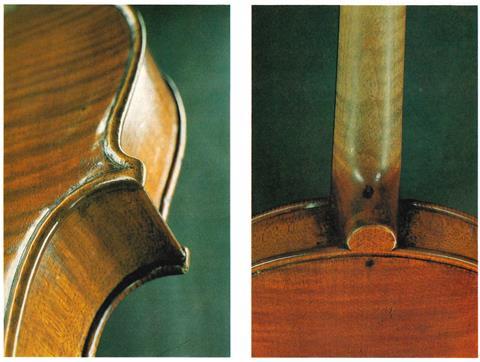 The viola is so well preserved that the corners can be studied closely. They are exceptionally long, and the terminating angle is very steep, almost parallel to the centre line. Not only is the very elegant purfling mitre offset in the corner, but the whole edge flute in the corner is displaced toward the middle bouts. The shape of the edge approaching the corner from the upper and lower bouts is thus rounded more than in the middle bout, which is virtually square in cross-section, and still shows rasp marks from the first finishing of the outline. This quirk is noticeable in many of the classical makers, but it is rare to see clearly how it was achieved. Rasp marks are also visible on the middle bout ribs, where they were altered to match the outline after construction. The slender purfling itself follows the edge of the upper and lower bouts, but swerves away from the middle bout in the corner to produce the extended mitre. It lies in a deep edge channel which is exceptionally wide in the upper and lower bouts. Bellosio habitually placed pins conspicuously within the purfling line on the centre line of the back, top and bottom. The back button is also well preserved and shows distinct inward cuts on either side.

The glory of this instrument is its virtually intact coating of lustrous, copper-orange varnish. There is a sparkling creamy ochre ground visible in only the few places where any wear has taken place, but the colour coat is very close to the wood, falling slightly into the pores, but not darkening the end grain. It lies delicately in the slightly raised grain of the front, and unlike most Venetian varnish shows no tendency to crackle, due possibly to the thinness of its application. Although the varnish is not water-clear, the slight invasion of the wood pores accentuates the grain, fleck and figure in what is actually only moderately marked timber; the ribs in fact are virtually plain. Varnish like this, that has escaped the shellac and French polish of generations of repairers is a rare joy. It is interesting to think that even as it flowed from Bellosio’s brush, violin makers elsewhere who had moved on to, or had never known anything but inferior stuff, were hunting for the “authentic” old varnish. Within a few years, Thomas Dodd in London was boasting that he was ‘the only possessor of the recipe for preparing the original Cremona oil varnish’. How often has that claim been made since then?

Bellosio died the year following the completion of this viola, on 21 August 1793, aged only 50. Was he already a sick man in 1792, or was his death a sudden event? The question raises the problem of how much of this late work was carried out by his pupils, Marco Antonio Cerin and Pietro Valentino Novello, both of whom were sons of Venetian violin makers. Very little is known of either maker after the turn of the century. Venice, occupied by France and then Austria, rapidly declined into the first cultural ‘theme park’ in European history, and seems to have been inclement to violin makers, and the methods and recipes of the great Venetians trickled away unnoticed. A violin in the Shrine to Music Museum, South Dakota, labelled Cerin, is clearly so close in style to those of Bellosio, that there can be no doubt that much of the later work could have been carried out by him, Some of the delicacy and refinement of finish is missing, and the scroll is less conscientiously cut, but the spirit of Bellosio hovers very near. Perhaps he would have been amused at the efforts of other violin makers throughout Europe already engaged on the feverish search for the ‘great lost varnish’, perhaps saddened by their graceless tracings of his elegant geometries.