CT scanning and the ‘Betts’ Stradivari 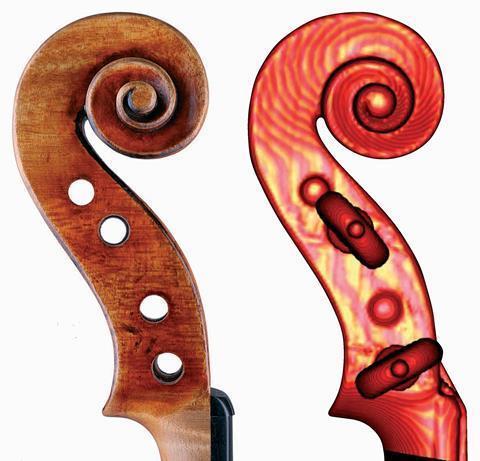 This is an extract from the article ’The ”Betts” Stradivari: The progress of progress’ which appeared in the May 2010 issue. To read the full article, click here

CT SCANNING AND THE ‘BETTS’

Radiologist and amateur violinist Steven Sirr and I have been using computed tomography (CT) scanning to study stringed instruments since 1989 and have scanned hundreds of stringed instruments. CT is a powerful technology that doctors use for looking into the human body to assess normal and abnormal anatomy. It uses many X-rays of predetermined plane sections of any solid object – in our case, the violin. 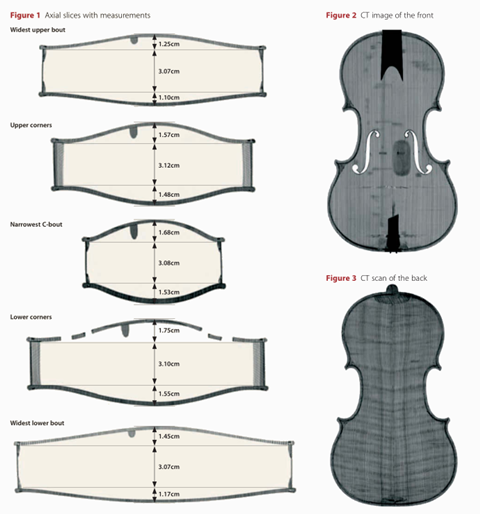 We obtained the raw data from CT scans performed on the ‘Betts’ by Gary Sturm and Bruno Frohlich of the Smithsonian Institution in Washington, DC, where the ‘Betts’ is housed as part of the collection of the Library of Congress. The most basic images that can be made from CT data are axial slices (figure 1) that show the shape of the archings, the thicknesses of the components and, to some degree, the grain structure. Using imaging software, the individual scans can be put together to make full-size images of all or parts of the instrument (figure 2). CT can also, in conjunction with computer software, be used for studying wood density; volumes of both the plates and the air chamber; mass; distribution of mass; and normal and abnormal features such as cracks, patches, repairs and woodworm holes.

The two-piece back of the ‘Betts’ is made of handsome, perfectly matched maple, cut on the quarter, with the curl slanting upwards from the centre seam. A CT scan of the wood of the back shows denser bands towards the centre on both sides of the centre and running from the upper to the lower blocks (figure 3). 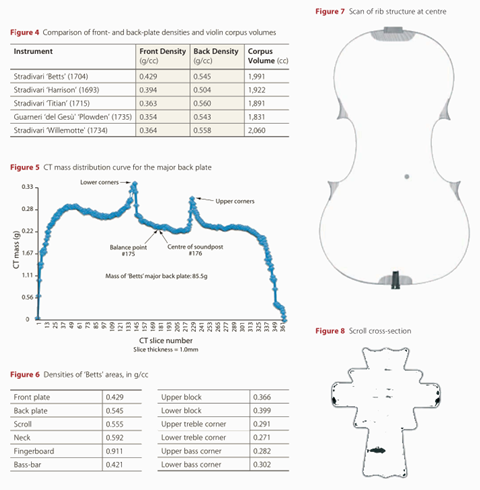 Using CT to measure the distribution of mass shows that the total mass of the back can be divided into two parts, an upper part and a lower part, with the dividing line at the soundpost position (figure 5). Most audio speakers are designed as a round diaphragm with a central energy source mounted in a more or less rigid cabinet. A violin back is not round, but does have a somewhat central source of energy input (the soundpost), and is mounted in a semi-rigid form (the ribs). Because the violin back is left thicker in the middle and thinner in the upper and lower bouts, the result is like a speaker. 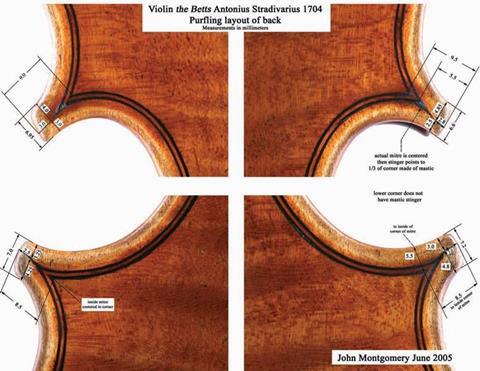 Figure 9 Corners in close-up with measurements

Measurements were taken by John Montgomery in June 2005

The top is excellent-quality spruce of the type so often used by the Stradivari workshop, the Guarneris, the Amatis and others. Overall, the wood of the top seems heavy compared with other Guarneris and Stradivaris we have measured (figure 4). Why would Stradivari choose a light back and a heavy top? Did the Cremonese masters of the time measure density in their wood? We don’t know. CT images of the top show some hazel, as Hargrave noted in his article. The arching is 16.7mm high at the highest point, 3.4mm thick at the thickest point, and 2.1mm thick at the thinnest point.

Stradivari’s typically shaped corner blocks are most likely willow, and their densities are listed in figure 6. The upper block would have been replaced when the neck was reset, and probably the lower block is also not original. The rib structure shown in figure 7 is taken at the centre. The scroll is similar maple to the back with a density of 0.555g/cc and is perfectly quarter cut (figure 8). With the ‘Betts’, as Hargrave stated, Stradivari seems to have been trying one last time to make the long, elegant corners  reminiscent of the Amatis, but with his own personal style.

His outline is beautiful, and the corners are long, but not as narrow. This results in difficult purfling corners. In fact, the purfling mitres are so long that, in order to achieve the look he was after, Stradivari used filler where the purfling didn’t fill the channel. The amazing proportions of the corners are beautifully shown in figure 9.

Hargrave wondered if Stradivari may have placed filler material in the entire purfling channel before inserting the purfling. This would make sense, but our imaging shows that if he did, he missed quite a bit of the channel. In fact, there are air gaps under the purfling in some areas (figure 10). The air volume of the interior of the ‘Betts’, without the area of the f-holes, is 1,991cc. A CT profile of the air volume shows that, as with the mass of the back, the air volume is divided vertically into two parts, an upper part and a lower part, with the dividing line again exactly at the soundpost (figure 11).

Read: The ‘Betts’ Stradivari: The progress of progress