Analysing the surprisingly complex geometry of the fingerboard

M.J. Kwan discovers how luthiers prefer to tackle the many questions of curvature and ‘scoop’ involved in creating a violin fingerboard 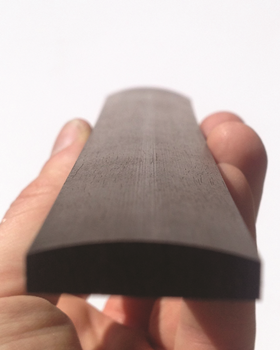 The asymmetric curve of a fingerboard

The following is an extract of a longer article in The Strad’s June 2018 issue. To read further, download now on desktop computer or via the The Strad App, or buy the print edition

The fingerboard is one of the most important parts of violin set-up, given that the player’s left hand comes into contact with it constantly. There are several schools of thought on how the fingerboard’s surface should be shaped, and each has its own advantages and compromises.

The surface of the fingerboard is geometrically complex: convex across its width, and slightly concave along its length. Some luthiers shape the board to match one or more radius templates. One commonly used template has a radius of 42mm, which relates the fingerboard to the top curve of the bridge (see Making Matters, February 2018). Towards the nut at the top of the fingerboard, the cross-radius will affect the comfort of the player’s left hand.

The slight concavity along the fingerboard’s length is referred to as the scoop, and is meant to reduce buzzing by giving the strings more room to vibrate. Makers typically gauge the amount of scoop they have planed into the board by looking at the gap under a straightedge placed along specific string paths.

The lower strings generally have larger vibration patterns than higher strings, and thus require deeper scoops. Too much scoop, however, results in higher playing action: the strings are further from the fingerboard, so the player needs to press down harder. The ‘right amount’ varies with different styles of playing, types of strings and player preference. 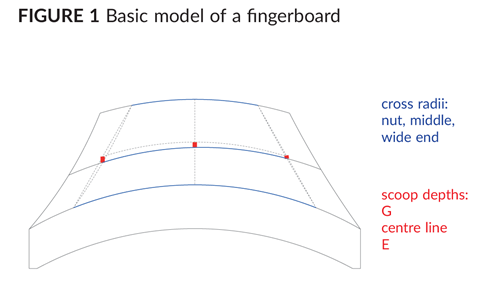 Whenever I have been given a set of radii and scoop depths to aim for, I’ve always wondered how the resulting surface might appear theoretically. Is it a section of a slightly bent cylinder? A cone? An inverted cone? A hyperbolic paraboloid? How do changes to certain dimensions affect others, and by how much? These are the questions I decided to investigate, by conducting a survey of luthiers online and statistically analysing the results.

To see the full article with the results of the statistical analysis and further diagrams, download The Strad’s June 2018 issue on desktop computer or via the The Strad App, or buy the print edition