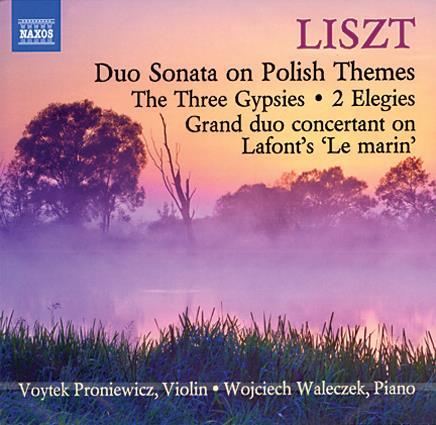 Polish duo Proniewicz and Waleczek have produced a nicely shaped selection of Liszt’s still relatively unexplored chamber music. The two chunkiest items frame the programme. The first is a Duo Sonata whose four movements are all based on the theme of Chopin’s Mazurka in C sharp minor op.6 no.2, in which the duo capture the Polish inflections and combine bravura playing with a natural fluency. Proniewicz’s high-lying harmonics in the fourth movement are both floated and secure. The single-movement Grand duo concertant, closing the disc, is a paraphrase on a popular romance: Proniewicz’s lyrical gift comes into play here, with plenty of charm. Both players show their mettle in the Tarantella-like variation and its ensuing Animato marziale with playing of clarity and agility.

There’s scope to explore darker tonal regions in the two Elegies (just sometimes revealing a hollow quality in the lower range of Proniewicz’s instrument). The Epithalamium and Valse-Impromptu recall respectively the realms of occasional and salon pieces, while there’s a keen narrative quality in The Three Gypsies, after Liszt’s own earlier Lenau setting. The sound is well captured and the two players – crucially the pianist too – are self-assured throughout.