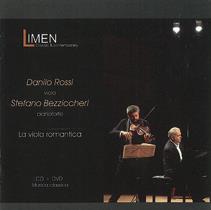 Earlier this year I reviewed a recording of the Brahms viola sonatas presented by these artists in a similar dual audio/video format (see The Strad, January 2012). Now as then, the partnership of 20 years’ standing between Danilo Rossi (principal viola at the Teatro alla Scala, Milan) and pianist Stefano Bezziccheri pays ample dividends with playing that is absolutely unified in its phrasing and timing. The music is treated in an uncommonly free way, with rubato generously applied in an almost operatic manner. As a result, the first movement of Schubert’s Sonata all but falls apart, each section lovingly led into and gently concluded before going on to the next one (the edition used is not free from several ‘traditional’ wrong notes, most noticeably in the slow movement’s first bar).

Glinka’s early, Italianate Sonata takes better to this treatment, and its Larghetto is kept nicely on the move. The texture of Schumann’s Märchenbilder is rather more complex and gives less room for extravagance, and Rossi and Bezziccheri are accordingly on their best behaviour here, achieving great expressiveness without recurring to agogical extremes. The recording is quite close, and gives Rossi’s sonorous intakes of breath a prominent role that can be distracting, especially in the audio-only version. Seeing him literally completes the picture, and it is the video version of this recital I enjoyed more, although the deep, virile tone of Rossi’s Maggini viola comes across beautifully in both formats.