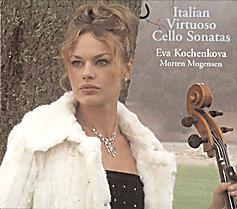 This disc largely comprises readings of editions by Alfredo Piatti, who took various liberties. technical, notational, textural and otherwise, including assembling the Locatelli D major Sonata recorded here from two sonatas by the composer. Eva Kochenkova is an accomplished artist, mellow of tone and generally technically secure, although some sour intonation remains, most notably in the middle movement of Boccherini’s A major Sonata. Her accounts of the Locatelli hybrid and Valentini’s E major Sonata have plenty of verve, even if the allegros occasionally seem somewhat garbled. However, the broad melody of Locatelli’s central Adagio proves an excellent vehicle for her sonorous tone and expressive sensitivity, and she dispatches the finale’s variations with imagination and panache. Her account of Donizetti’s Largo provides more serious, dramatic contrast.

Kochenkova seems at ease with her Romantic take on mostly Baroque and early Classical music. The fact that the original character of these works often changes with her bouncing bow and other 19th-century articulations seems not to matter when the music sounds so idiomatic in its new dress. She enjoys sympathetic support from pianist Morten Mogensen, who doubles as producer of this somewhat boxy, c.50-minute recording. Overall, a curious mixture of old and new, played on a modern cello with gut strings.