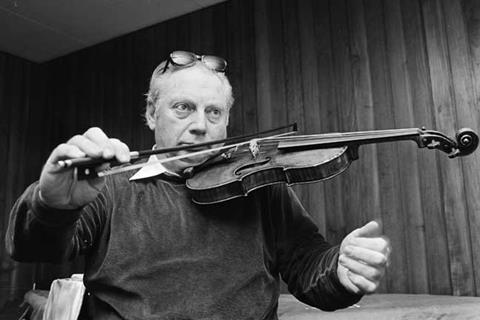 Isaac Stern, one of the youngest of the great violinists of the 'Golden Age', was celebrated as much for his humanitarian endeavours as his mastery of the violin. Born in Kremenets, Ukraine in 1920, Stern was removed by his parents to San Francisco before his first birthday. The young Stern began playing the piano at the age of six, but converted to the violin two years later. After a brief period with Louis Persinger (the celebrated mentor of the boy Menuhin), Stern studied with Naoum Blinder at the San Francisco Conservatory between 1932 and 1937. Aged 15, he made his official debut with Blinder and the San Francisco Symphony Orchestra playing the Bach 'Double' Violin Concerto under Pierre Monteux. His performance was warmly received but it was his return to New York in 1939 that truly sparked the public's attention. As a now established name, he made several wartime performances for Allied troops and in 1945 he made his first recordings for Columbia. After making his European debut at the Lucerne festival in 1948, Stern became the first American violinist to tour the Soviet Union in 1956 and later travelled to China in 1979 before reconciliation with the west was complete. These tours typified Stern's belief that music should be used to further humanitarian goals and he was a lifelong supporter of the Jewish state, founding the Jerusalem Music Centre among other cultural institutions in Israel. An instinctive risk-taker, Stern would willingly sacrifice absolute technical cleanliness in his pursuit of higher musical expression. Stern's principal violin was the 1737 'Panette' Guarneri 'del Gesù'.