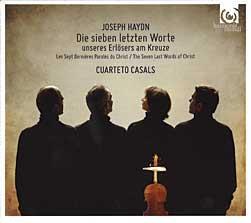 With sparing use of vibrato and subtlety in the application of tonal colours, the players of the Casals Quartet bring a suitably devotional approach to Haydn’s ‘Seven Last Words of Christ on the Cross’, a work originally intended for orchestra with each movement interspersed by a religious discourse.

Without those interludes, performers face the problem of having to retain listener interest through seven consecutive slow movements, but the Casals response is to introduce subtle tempo changes within each movement to heighten their expressivity. Yet when needed, as in the opening section of the second movement, the players adopt a very rigid pulse to bring a sense of spiritual peace, limiting the width of their dynamic range unti the outburst in the final earthquake. Even in the pained forzato accents in the fifth movement do they avoid the oft-used exaggerations.

More than I have found anywhere else on disc, the Casals players use each movement as a conversation piece between instruments, changing to a feeling of narrative in the third movement, ‘My God, my God, why hast thou forsaken me’.

To be pernickety, the first violin intonation is not spotlessly clean, but with ideal inner clarity, refinement of tonal quality and the excellence of a transparent recording, this disc can be highly recommended.