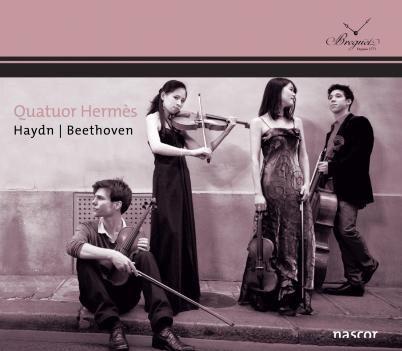 The Strad Issue: January 2013
Description: A CD debut that proves to be just a little too adventurous
Musicians: Hermès Quartet
Composer: Haydn, Beethoven

Having won the Geneva International Music Competition in 2011, the French-based Hermès Quartet has more recently taken first prize in New York’s highly influential Young Concert Artists auditions and here offers its debut disc. The players adopt suitably urgent tempos for a fresh-faced reading of the outer movements of the fifth of Haydn’s op.20 quartets, with their fugal finale initiating a delightful sense of fun and happiness. Yet compared with my benchmark of the Mosaïques Quartet (Astrée Naïve), I find their phrasing in the minuet second movement, and in the following Adagio, lacks those subtle rhythmic inflections that help create performances of lasting interest.

Beethoven’s op.127 also opens in purposeful mood, the players ever mindful of the abrupt changes of dynamic and mood. Here, though, they reveal passages of questionable intonation, and even more so in the fast-running passages of an admirably paced second movement. I would have preferred a more magical effect in the quiet passages of the finale, though the Hermès’s jaunty view is unusual and pleasing.

In summary, one must conclude that these players’ emerging and very obvious talents would have been better served by avoiding works already recorded by the world’s most famous quartets. The sound is rather close.