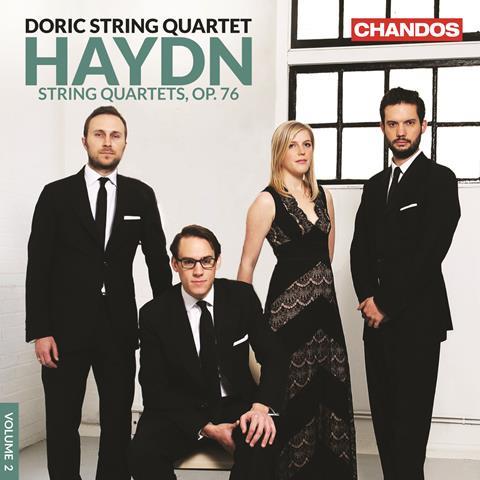 The Doric Quartet’s accounts of Haydn’s six quartets op.76 are technically assured, carefully determined, strikingly unanimous in intent and delivered with considerable panache. Balance and blend are exemplary and characterisation is deft, whether in emulating gypsy fiddling (with slides) in no.2’s finale, realising the humour of no.1’s trio and no.6’s scherzo, or recreating the rustic drones in no.3’s opening Allegro, no.4’s trio and no.5’s finale.

These players bring an apt poise and breadth to the slow movements, especially of nos.1, 3 and 5. They relish Haydn’s unpredictability and are unafraid of taking liberties with matters of articulation, tempo flexibility and expression. Nevertheless, they exploit a wide dynamic range and bring a real sense of timing to structural cruxes (notably the quasi-cadenza and coda of no.2’s slow movement). There is arguably too much ‘gapping’ in their shaping of some phrasing (for example in the first movement of no.3), but they also use silence as an effective dramatic tool, notably in their expansive view of no.4’s first movement, and seem almost casual in introducing the principal theme of the opening movement of no.1.

Tempos are generally well judged, particularly that of no.4’s finale, which allows Haydn’s later, faster indications fully to register; but the Doric never really settles for one speed in the first movement of no.4, and there are times (notably in the exuberant finales of nos.1 and 3) when the going seems unnecessarily tough for cellist John Myerscough to articulate his figurations with optimum clarity. The recording combines immediacy with an attractive ambient warmth.