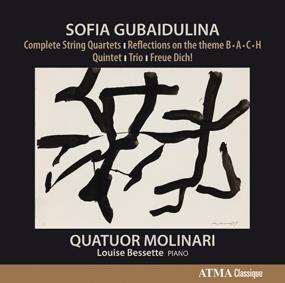 They give a silky-smooth account of the episodic First Quartet, with an exceptionally clear, precisely articulated approach that carries over into the rest of these performances. The remarkable range of pizzicato sounds that the players achieve in the opening of their enormously spirited Third Quartet particularly stands out, as does their battle to overcome two rival taped quartets in the theatrical Fourth Quartet. Even the early Piano Quintet, a student work that owes a huge debt to Shostakovich, gets a thrillingly compelling performance which shines a bright light on the nascent timbral elements that would so preoccupy the composer’s later music – in the vividly etched clusters that close the first movement’s development, for example. Pianist Louise Bessette is bright and clear without being overdramatic in the stomping first movement, and supple in a limpid slow movement.

Paradoxically, though, the fact that everything sounds so pristine and effortless ends up detracting from the spiritual struggles that are so often behind Gubaidulina’s music – as though the fight has already been won. Nevertheless, these are exceptionally fine performances, captured in warm, faithful sound.