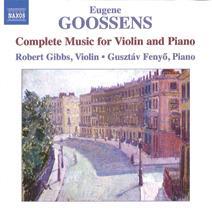 Born in London in 1893, Eugene Goossens was the third generation to carry that name in a dynasty that produced many eminent musicians. He was possibly the most gifted, though history may conclude that he lacked direction as he became a noted conductor, educationalist and composer, dividing his life between Britain, Australia and the US.

His works acknowledged modern trends but were cast in a melodic mode whose roots were firmly embedded in the late Romantic era. The long and sensuous melodies that characterise the two violin sonatas, written in 1918 and 1930 respectively, run stylistically in parallel with Szymanowski. Their use of the two instruments as equal voices is particularly apparent in the performances on this new release. Coloured by a fast vibrato, the tonal quality of Robert Gibbs is well suited to the brightness and happy disposition of the outer movements of the First Sonata. In the Second Sonata the recorded balance could have been more generous to Gibbs, yet the pro-active sections of the finale draw a fine display of left-hand agility.

Three short pieces complete this well-filled disc, with the salon quality of the Romance from Goossens’s opera Don Juan de Mañara a particular delight. Sound quality is unfussy but truthful.