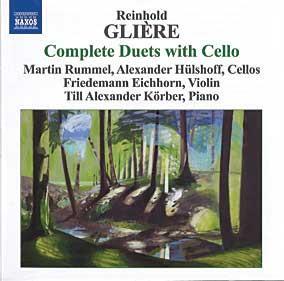 As Reinhold Glière was a student of Arensky and Taneyev, it’s little wonder that he was steeped in Russian Romanticism. His study with Taneyev reinforced a strong skill in counterpoint – the very reason why his duos are so artfully constructed. If we’re being picky, the op.39 set for violin and cello allows the violin to dominate melodically, with the cello often consigned to a harmonic role, albeit sumptuously rich with plentiful double-stops. There’s a glimpse of stardom for the lower instrument in the final Etude, but the violin here somewhat smothers this limelight. That apart, the ensemble and characterisation in this clear recording really make it exude great passion and commitment.

The items for cello and piano offer some useful examination material, particularly the Twelve Album Leaves. The Allegretto, for example, has an attractive rustic hue, while the 5/4 time signature of the ensuing movement provides elegiac melodies aplenty. Again the performances from MartinuRummel are fervently drawn and especially brilliant in the virtuosic Animato.

Perhaps the stars of the show, however, are the ten cello duos op.54. Musically they are varied in character, with the interest equally spread between the parts. Although the same ardent Romanticism is predominant, it is offset by more pungent pieces that utilise spiccato and double-stops, and exploit finger dexterity. Rummel and Alexander Hülshoff share the parts – their blending and ensemble are consummate and the performances altogether splendid.