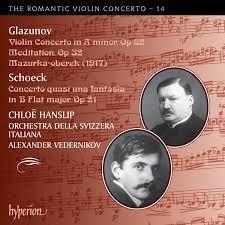 Chloë Hanslip may be aged only 25, but it’s already more than 11 years since her debut CD. Apart from the Bruch, she’s steered clear of the key Romantic concertos, this release following her disc of Vieuxtemps for Hyperion last year.

The Glazunov Concerto has plenty to tax even the most accomplished of players, and yet Hanslip is remarkably assured in it. Her sound may not be as richly upholstered as that of her fellow Zakhar Bron pupil Maxim Vengerov (he was just 21 when he released his recording of the work), but she has a more fluidly relaxed, more conversational approach to phrasing that suits its rhapsodic form. Even in the challenging cadenza, she creates a sense of spaciousness, before the pyrotechnics of the finale. Throughout, there’s no sense of any aversion to risk-taking.

There could be a touch more warmth in Glazunov’s Meditation, though again this is a highly convincing performance. The distinctly folk-inflected Mazurka–oberek, based on Polish national dances, gives Hanslip ample chance to show off her bottom-string tone, while conductor Alexander Vedernikov maintains lightly plucked orchestral accompaniments with the occasional tinkling triangle.

The Concerto quasi una fantasia by Swiss composer Othmar Schoeck (1886–1957) receives a committed performance, too, though it may justifiably remain a rarity. There’s less acoustic ‘space’ around the orchestra than the solo violin, but there’s a studio-like clarity in this auditorium recording.