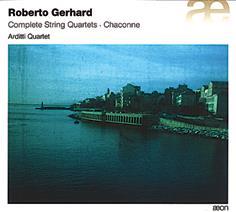 Born in Spain in 1896, Roberto Gerhard became Schoenberg’s only Spanish student, later fleeing his homeland at the start of the Civil War to settle in Cambridge and become a British citizen. His international background had a profound effect on his music, as the three works on this fine disc attest, combining a serious-minded Schoenbergian serialism with Spanish folk influences and a more forward-looking experimentalism that aligns him with the likes of Penderecki and Ligeti.

It’s a rich mix, but one that the Arditti players convey with admirable clarity and verve. They make a strong case for the energetic First Quartet, the most overtly Schoenbergian piece on the disc, in a lively, characterful performance full of perky wit. Harmonies are beautifully turned, phrasing is lithe, and the foursome has a natural feeling for the music’s ebb and flow.

They’re in their element in the Second Quartet, where the effects-laden textures reveal the influence of Gerhard’s experiments in electronic music. It’s a performance that balances cool objectivity with heated passion, and they negotiate the piece’s abrupt changes of direction and extreme contrasts magnificently.
Leader Irvine Arditti makes light work of the solo-violin Chaconne’s fearsome technical demands, while also providing a clear-headed route through its harmonic complexities.

Although a little echoey in the Chaconne, recorded sound is crisp and clear.