From the archive: Vibrato on the Violincello

In this article published in The Strad, May 1912, Emil Krall offers some instruction 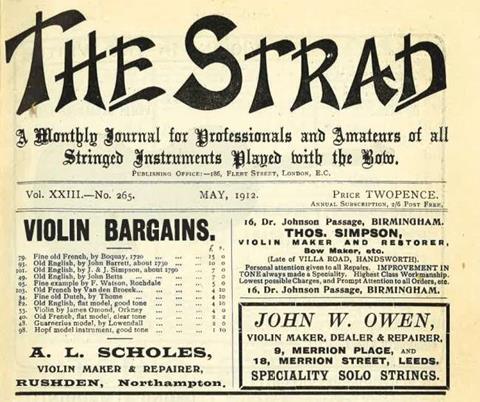 In contrast to the elementary steady condition of the tone, which is the expression of quieter feelings, representing simplicity, clearness, dignity, and solemnity, the vibrato forms a very important, if not indispensable, means for rendering the tone more impressive and sensuous. For the development of tone quality, carrying- and tone-power, it is of the greatest artistic value.

Consisting in a quiet shaking of the finger that firmly stands on the note, it causes the interruption of its steadiness and produces a vibration of the tone which sends forth distinguishable tone waves. As a technique it is the natural result of an endeavour to impart warmth, expression, and life into the tone, thus rendering it more sensuous, and more effective.

It is, however, incorrect to confound the vibrato with a mere trembling of the finger or hand – though it is natural to commence in that way – the fact holds good here as well that rudimentary means of expression can only become artistic by the absolute control of the player over them. A trembling of the finger is uncontrollable as it is the expression of an uncontrolled temperament. Besides, a hurried quick succession of such vibrations can never be beautiful in slow pieces – it is out of place here.

The real Vibrato – as an artistic device – can only be learned by practice. Each little movement or shake of the finger, producing a wave of vibration, must be controlled, and the work lies between the steady tone and the uncontrolled trembling of the finger.

To ensure control over a vibrato, the following directions will be useful for practice:

The position of the left hand and arm should not be too low, so that the finger can stand on its tip, acting as a hammer.

Behind the neck, the thumb, counteracting the pressure of the vibrating finger, must be stretched – not bent.

The vibrations are done slowly by moving the hand sideways to and fro, whilst the finger – firmly standing on the string – acts like a bent piece of elastic wire. The finger must stand independently and press on the string by its own force. Particular attention must be paid not to press the joint, in which the whole finger moves, downward. It ought to remain in one line with the back of the hand and the first phalange of the finger – because only then does the finger possess the strength to stand firmly by its own force on the string, and the vibrato can be done in the elastic way.

The adjoining fingers must not support the vibrating finger, but should be held apart from it and raised.

The point of the finger on the string is the immovable basis. The impulse of the vibrato is not given by the finger itself, but by the wrist and even by the forearm (the muscles of the upper arm of course being engaged for that purpose). For if the finger is really strong, if its first phalange forms a straight line with the back of the hand, a line which should extend even as far as the elbow, then the vibrating movement is done along that whole line, viz., forearm, hand, finger, causing the tip of the latter to oscillate on its resting point and thus producing the vibrations of the tone.*

The whole practice consists in not allowing the vibrating impulse to become spasmodic and uneven, but to learn to exercise consciously, to control each vibration, and by such control produce an eve and artistic vibrato.

Saturated with an artistic sense for the really beautiful, mastered by the controlling mind, the vibrato thus becomes a powerful means of expression in the hands of the skilful and patient, well apt to impart the emotions of the player into the tone. It is a matter of temperament and taste how much and how often vibrato should be applied. Those who condemn it entirely only admit that they do not feel the music as deeply as those who use it as an artistic device, to enhance and ennoble the sensuous power of the tone in order to render its message more effective – more convincing.

*Imagine even the whole line, from elbow to finger (curved) an elastic wire, let somebody take hold of your wrist (taking the sides between the fingers) and move it gently to and fro in the direction of the fingerboard, so that the whole line is put into motion – and the real vibrato is created.

Subscribe to The Strad or download our October 2013 digital edition as part of a 30-day free trial to read Simon Fischer's Basics article on vibrato.