From the Archive: a violin by Nicolo Gagliano, Naples 174- 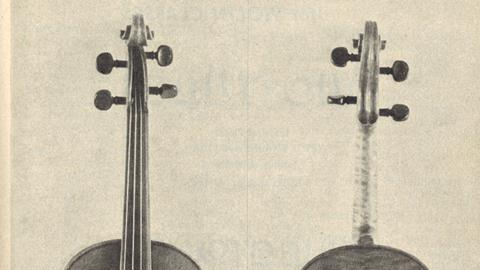 This illustration of a violin by Nicolo Gagliano was published in The Strad, December 1961. The following text is extracted from the article accompanying the photographs:

Nicolo Gagliano was one of the best, if not the best, workman of this numerous and well-known Neapolitan family. The eldest son of Alessandro, the founder of the family, Nicolo was presumably his father’s pupil, as well as his brother Gennaro.

Nicolo’s violins and cellos were well finished and show a good deal of originality. He also made a number of instruments with ornamental inlay in which the workmanship is of a very high order. His violins are not, as might be expected, after the pattern of his father’s, being narrower and frequently similar to the earlier works of Stradivari. The cutting and position of the sound-holes, which are generally set very upright, and the treatment of the scroll, give Nicolo’s violins a marked individuality.

The illustrated violin closely resembles a long pattern Stradivari. It dates from the 1740s, the final figure on the label cannot be deciphered.

The two-piece back has some rather unusual markings: the figure tends to feather out at the flanks and there are a number of prominent sap marks at the lower half which are clearly visible in the photograph. The head and sides – the former is very characteristic of this maker – are of wood with a similar figure. The table, which is in two pieces, of pine very even, narrow grain. The varnish is a light golden-brown over a gold undercoat.