From the Archive: a violin by Michel Angelo Bergonzi, Cremona, 1756 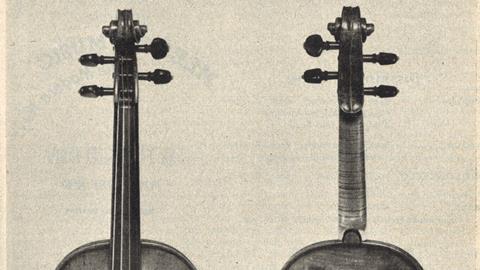 This illustration of a Michel Angelo Bergonzi violin was published in The Strad, October 1960. The following text is extracted from the article accompanying the photographs:

Michel Angelo Bergonzi, the son of Carlo Bergonzi, was born in 1722 and died about 1770. He was the pupil of his celebrated father with whom he worked for a number of years. It is now established that Carlo Bergonzi was a fellow pupil, with Giuseppe Guarneri del Gesù, of Joseph filius Andrea, who was del Gesù’s father.

Carlo’s son has been treated with a very off-hand manner by the majority of writers on the violin. Although not as fine a craftsman as Carlo, his fame has been overshadowed by that of his father, but his standard of workmanship is far higher than he is usually credited for.

This month the illustration is of a characteristic example of Michel Angelo’s work. The dimensions of this violin are as follows: Length of Body, 14 inches; Top Bouts, 6 5/8 inches; Lower Bouts, 8 inches (full); The Ribs, 1 3/16 to 1 14 inches.

The two-piece back is of wood marked by a very small curl with a sap mark on both halves. Similar wood has been used for the particularly fine scroll, whilst the figure of the wood used for the ribs is more pronounced. The pine of the table is of medium width.

A feature of particular interest in this violin is Michel Angelo’s treatment of the soundholes in which the wings are noticeably wider at the top than at the bottom; the reverse of the usual practice. Michel Angelo’s soundholes are usually narrower than those of Carlo. In this instrument the purfling is also wider than he normally used in his violins.

The varnish of this Bergonzi is light brown in colour. The maker’s varnish is usually a rich red or orange-red heavily applied.