From the Archive: A violin by Giovanni Francesco Pressenda, Turin, 1837 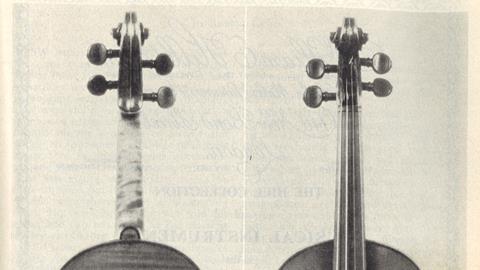 This illustration of a violin by Giovanni Francesco Pressenda was published in The Strad, March, 1970. The following text is extracted from the article accompanying the photographs:

Giovanni Francesco Pressenda generally followed a Stradivari model, especially in his early violins; later he designed a pattern of his own where the sound-holes and archings differ from his former work.

The maker carefully selected his wood, and it is very seldom that we find one of his violins without a handsomely figured back. The majority of his backs are in one piece cut on the quarter and covered with lustrous varnish which greatly enhances their beauty. Pressenda experimented with his varnish which varied in colour, the most successful being a deep mahogany red.

The Pressenda illustrated, the authenticity of which is certified by Rembert Wurlitzer Inc. of New York, is now in the possession of an American collector Mr. Ted Marchetti of 4175, Nottinghill Gate Road, Columbus, Ohio, who is offering it for sale.

The back is cut on the quarter from one piece of maple with irregular medium broad flames slightly descending from treble to bass side. The top is cut from two pieces of spruce with medium narrow grain at the centre, broadening slightly on the flanks. The sides and scroll are of maple matching that of the back. The varnish is dark reddish in colour.