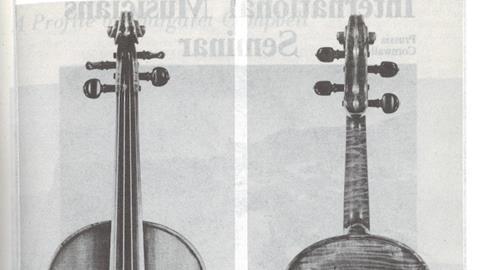 This illustration of a violin by Charles François Gand was published in The Strad, September 1977. The following text is extracted from the article accompanying the photographs:

Charles François Gand is the most important member of a family of talented French makers who, after Lupot, ranks next to Pique and Vuillaume. His substantially constructed instruments built from the choicest woods have now mellowed tonally with age and legitimate wear.

Gand was born at Versailles in 1787, the son and pupil of Charles Michel Gand (1748-1820). In 1802 he left his father's workshop to become apprenticed to Nicolas Lupot in Paris. He worked for Lupot until 1810 in which year he opened up in business in Paris on his own account.

In 1824 Lupot died and Gand, who was married to Lupot's daughter, became Lupot's successor and took over the business in the rue Croix-des-Petits-Champs.

Illustrated here is a typical example of Gand's work in a fine state of preservation. The violin bears a label of Nicholas Lupot dated 1820. The one-piece back is of beautifully figured maple with irregular horizontal flames. The ribs and the original scroll are of similar wood. The table is of choice even grained spruce widening slightly at the flanks. The original varnish, plentifully applied, is a brownish-red on a golden background, shaded by use.