From the Archive: a violin by Carlo Ferdinando Landolphi, Milan, 1752 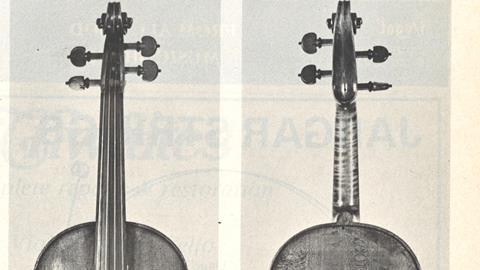 This illustration of a violin by Carlo Ferdinando Landolphi was published in The Strad, October 1982. The following text is extracted from the article accompanying the photographs:

The earliest records say that this instrument was owned by Count Alfred Belissa of Genoa. A letter written on the Count's personal stationary stated that his friend Nicolo Paganini frequently enjoyed playing the violin while visiting him. On the death of the Count in 1892, the instrument was purchased by Carl Zuck, a well-known dealer in Vienna. In the same year at the theatre and music exhibition in Vienna, the firm of Lyon and Healy of Chicago, Illionis, bought the violin. The instrument was then sold to an amateur player, who several years later sold it back to Lyon and Healy. It was then in 1919 advertised in their catalogue as item No. 5320 and purchased by Professor Williams from whose estate the owner recently acquired it.