From the Archive: a violin by Antonio Stradivarius, Cremona, 1723, the ‘Jules Falk’ 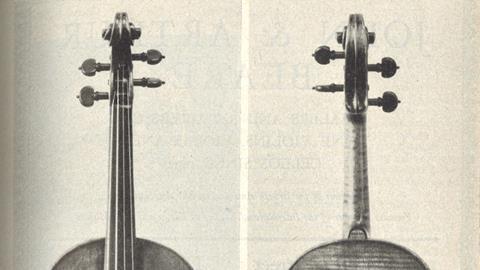 This illustration of the ‘Jules Falk’ Stradivari was published in The Strad, August 1960. The following text is extracted from the article accompanying the photographs:

The Stradivari illustrated has an interesting and well-documented history. It is possible to trace its ownership without a break since it was in the possession of the celebrated collector, Count Cozio di Salabue, of Florence, who possibly purchased it direct from the maker’s younger son, Paolo, some years after Stradivari’s death in 1737.

It passed through a number of famous hands, including celebrated Italian dealer Luigi Tarisio, J.B. Vuillaume, French violinist Vidal and American owner Jules Falk, from whom it takes its name.

The ‘Jules Falk’ is in an unusually fine state of preservation. The one-piece back is of maple of native growth marked by a small curl slanting downwards to the right, that of the sides being similar. The head is of plainer wood. The table is of pine of fine grain. A beautiful red-brown varnish covers the entire surface.

In 1723 Stradivari was approaching his 80th year but was still active as a maker, although as would be expected, his output had declined. The marvel of it, is that his hand is plainly visible in all his works, even to the very last.

NB: The instrument is currently owned by violinist Viktoria Mullova