From the Archive: a Pierre Silvestre violin, Lyons 1847 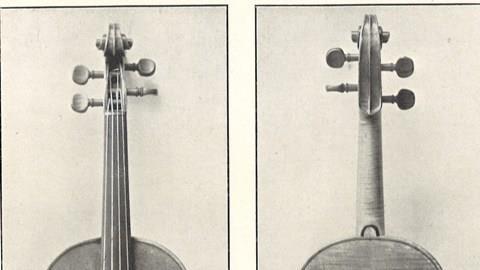 This illustration of a Pierre Silvestre violin was published in The Strad, May 1916. The following text is extracted from the article accompanying the photographs:

I have met with other Silvestre instruments which in beauty of material have equalled or surpassed the illustrated instrument, but taking all points of workmanship, wood, and varnish, collectively, I doubt whether he ever produced a finer specimen of the luthier’s art.

The specimen under notice has a very fine tone; red varnish of a brilliance and texture which I have never seen excelled in any instrument made in the last century; a scroll of great beauty; and the workmanship throughout is finished with all the scrupulous care and attention which are characteristic of the Lyons artist; in these matters he had no superior even in the school of Cremona.

So far as I know Pierre Silvestre was content to copy the patterns of the great Cremonese masters, and did not attempt much in the way of originality of design. His measurements are usually pretty full, and the width of the upper bouts is noticeable. Stradivarius was his ideal and he imitated him admirably. The waists of his fiddles, like many of those of Vuillaume and other Frenchmen, are usually rather wider than those of the original types, but the extra breadth is hardly so apparent as in the case of the upper bouts.

The cutting of the soundholes is as finely done as that of any copyist who ever lived. The purfling is generally narrow, and inlaid with a precision which will bear almost microscopic examination.